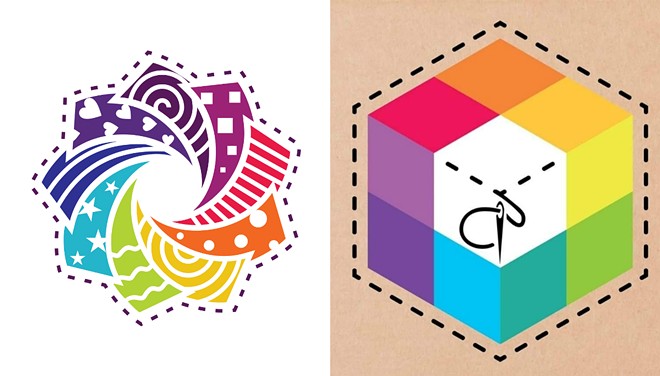 The outline of a stitch and a circular color pattern featured in the logo of a Missouri-based quilt-box subscription service is at the center of a trademark dispute launched in federal court this week.

Cotton Cuts, a Chesterfield company that also operates a retail location in the Chesterfield Mall, is now asking a federal judge to decide whether its "Rosa" logo, a circular swirl of colorful fabrics, is being infringed by the logo of a competing quilt box subscription service.

That company, Kentucky-based Paper Pieces, runs a quilting subscription-box service called Quilty Box. Its logo features a stitched outline and a color arrangement that, as described in an August 18 cease-and-desist letter from Cotton Cuts, represents a "blatant copy" of the Rosa design.

"Clearly, Quilty Box’s continued use of this infringing logo will lead to confusion among consumers," the letter stated, noting that Cotton Cuts had registered its design in 2016, while Paper Pieces launched its Quilty Box service in 2019.

But ten days later, Paper Pieces fired off its own cease-and-desist letter, accusing Cotton Cuts of essentially committing the same infringement. The letter from Paper Pieces' attorney began, "Thank you for making us aware of your infringement of our trademark."

In its response, Paper Pieces noted that its Quilty Box logo was based on the company's older logo design, which it had been using since 2002. "Our Quilty Box logo is derived from our branding," the letter stated. "As you can clearly see, your logo is very close to our registered trademark."

In its lawsuit filed this week, Cotton Cuts countered once again with its claims that its Rosa design is the one being infringed; the company wants the judge to resolve the "actual controversy" over which logo is violating the trademark of the other.

Messages left Wednesday with the attorneys representing the companies were not immediately returned.