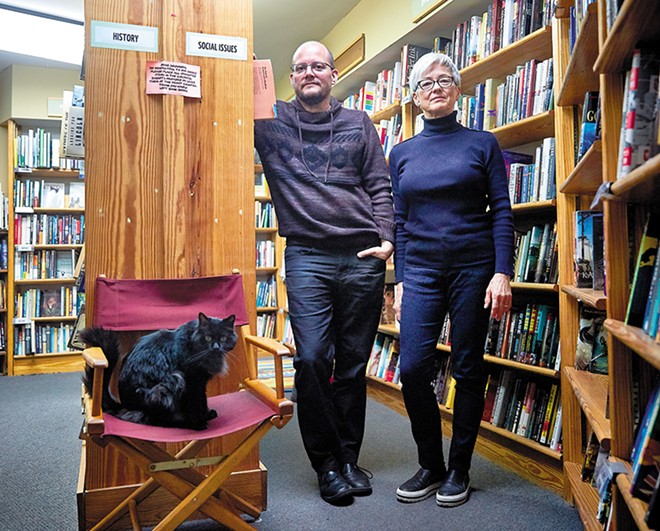 “Imagine that somebody learned what your name is but kept calling you something else, insisting that’s who you are,” says Jarek Steele, co-owner of Left Bank Books in the Central West End. “It makes you feel like you’re being a fraud, like you’re lying — but you’re not.”

With this in mind, Steele vowed to change the existing online retail system that allows trans people to be invalidated.

On Sept. 9, these ideas finally came to fruition. Left Bank Books became possibly the first indie bookstore to use an e-commerce system that accepts preferred names rather than legal names, specifically aimed at helping trans people checkout with their post-transition identity.

Steele originally came up with the idea when his friend, in the midst of her transition, ordered books from their website. Because she had not legally changed her name yet, all further communications from Left Bank used her former name.

“I was mortified, because I know how that feels,” Steele says. “I thought, there has to be some way around this, this can’t possibly be the way things are forever.”

Steele’s mission was set. Though, as many indie bookstores in the U.S. use the same checkout system, the American Booksellers Association, he knew the undertaking was going to be difficult.

For a few years, the ABA turned down Steele’s requests, saying that there was too much coding involved. Steele created his own workaround, where the Bookstore’s employees would input preferred names manually. Through each sale, this was how Steele and Left Bank Books advocated for their customers.

After COVID, however, their makeshift system couldn’t keep up with the growing number of online orders. In previous years, only 4 percent of their sales took place online, but that has skyrocketed to 88 percent. This meant that they would unintentionally dead name many of the trans people who shopped on their website.

Steele decided this was unacceptable. Reaching out to the ABA again, he argued that the system “needs to work as well for trans people as it does for cisgender people.”

This time, they listened. Now, at the checkout, the system requires a preferred name, which defaults in all the communications to their customers.

Steele knew he had to speak out against the previous, outdated system because “Nobody is going to advocate for a trans-inclusive system unless they know there’s a problem,” he says. The bookstore owner was intimately familiar problem, as he went through his own transition sixteen years ago.

“I was born in a female body,” he says. “Every step of the way for a trans person is difficult because every piece of identification is wrong. Whenever you have to present your information to someone, it erases you and calls you something that you’re not.”

Changing all of his personal information was a very difficult process, Steele says, an undertaking that even resulted in backlash.

“When I tried to change my driver’s license for the first time in St. Louis, I actually got thrown out,” Steele says through laughter. “I got into a fight with the worker. I said I needed to change my gender, and they started to ask me inappropriate questions about my genitals, and I got really mad and I had to leave.” After that experience, Steele didn’t legally change his identity for another three years.

However, with the new retail system implemented, Steele knows that his business will never add to the plentiful struggles of trans people. In fact, when the ABA sent news of the successful update, “I practically danced around the room,” Steele says.

Sayer Johnson, executive director and co-founder of the Metro Trans Umbrella Group in St. Louis, affirms that the feat of Left Bank Books is incredible.

“Whenever you have to provide your previous name for something, especially when someone will call you by that name, it can be triggering or traumatizing. Not everyone has the ability to change their name, whether it be for financial reasons or because of their family,” he says.

To know that there are people advocating for the trans community, Johnson says, “I felt really proud to be in a city that stands up for people like that.”

“I’m a bigger Left Bank Books fan than I already was,” he says.

To add to the success of this endeavor, Left Bank Books’ advocacy made it easier for all the bookstores who use the ABA’s checkout system across the country to be inclusive to the trans community.

While this new program is a major feat for Left Bank Books, this is will not be the end of their battle for inclusivity. In the future, St. Louis can always expect new, innovative ways for Left Bank Books to advocate for people, because it is simply part of their philosophy.

For now, the Central West End bookstore can be assured that they lived up to the mission posted on the shop's website:  providing "literacy and justice to all."