St. Charles election workers are being instructed to "act surprised" when asked by voters why they are not wearing masks. The guidance, which was was contained in an email sent Wednesday to the county's election judges and supervisors, instructs workers to employ a policy of deception about their personal mask-wearing habits until the voter leaves.

Kurt Bahr, director of elections for St. Charles, confirmed the authenticity of the email, explaining that the guidance is intended to avoid confrontations between election workers and voters over the issue of masks.

He conceded that the "verbiage there [in the email] was not the best."

According to the emailed guidance, judges and supervisors must keep a mask nearby, but they are not required to wear it.

"When a voter says something to you about not wearing a face mask or not wearing it correctly," the email advised, "please put it on properly."

The guidance then described actions an election worker may take to leave the voter with the impression that they are wearing a mask properly. (Wearing masks is a practice encouraged by the CDC and health experts to prevent the spread of COVID-19.)

"You may act surprised that you don't have a face mask on properly and then apologize as you put the mask on," the email continued. "Wear your mask correctly until the voter leaves the polling place. Please do this every time a voter says something to you." 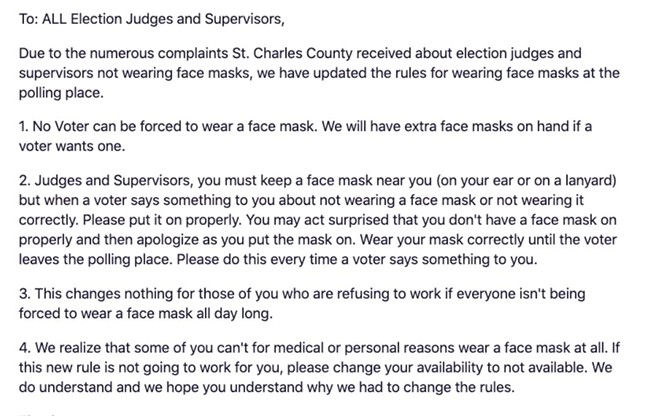 St. Charles County, which does not have a mask mandate in place, has recorded 6,920 confirmed cases of coronavirus and 126 deaths. In the past week, St. Charles surpassed the number of St. Louis City's COVID-19 cases.

Defending the policy and the email's guidance, Bahr says that "The point of that sentence was to communicate that [election workers] be polite," though he acknowledged that he's also received "several negative responses" about the email.

"Apparently," he added, "those who are for a mask mandate found that condescending or inappropriate, and I did not take it that way."

Bahr says that some of the county's election workers have unspecified medical reasons for not wearing masks, while others have personal reasons or find wearing them uncomfortable for long periods of time. When asked about voters, he conceded that they may have "legitimate health concerns," but argued that the policy is necessary to avoid delays in the voting process.

"I don't want our election bogged down because our judge and voter is having a conversation about who is wearing a mask," he says. "Those conversations are unproductive for an efficient voting process."