He Was a Drug Smuggler. Now He's a Proud Boy Running Against Cori Bush

On April 24, 2017, Alex Furman's last day as a drug smuggler ended when the nose of his small plane crunched into the dirt, throwing him face-first into the controls. He'd missed the runway by about 50 feet.

Furman, who grew up in St. Louis County, had moved to California in 2015 after earning a pilot's license and a stint as a student at Central Missouri University. But on that Monday in April, when the square-jawed 24-year-old emerged bloodied from the cockpit of his Cessna 210, he soon found himself facing questions about the 6,200 grams of hash oil police found in a suitcase.

There was also the small matter of $700,000 in cash wrapped in vacuum-sealed bags. Police seized two unregistered handguns from his apartment.

Despite all that, today Furman is out of prison and off probation. Less than a year after his hard landing, he pleaded guilty to a single charge of possession with intent to distribute and was released on time served. In 2018, he moved back to St. Louis — and since then, he's picked up some new roles.

He's gainfully employed as a locksmith. He's in the St. Louis County Libertarian Party and running for a seat in the U.S. House of Representatives against Democrat Cori Bush (although, given the blue district, she's all-but-guaranteed to win her seat come November.)

There's one more thing: Furman is the vice president of the St. Louis chapter of the far-right Proud Boys, a frat-like group that's gained renewed notoriety from members' appearance in street fights and pro-Trump caravans in Portland and Seattle.

In St. Louis, however, the group appears to have few members, and in an interview, Furman echoes the group's longstanding contention that it is not animated by racism or white nationalism, but merely a "drinking club" of like-minded boys who are proud.

On a recent afternoon, Furman is working on a lock mechanism that he's extracted from the front door of a church. In an interview, he concedes that the Proud Boys are often seen publicly in the guise of "street militia." He doesn't see himself as "a Proud Boy candidate" — or, for that matter, as a particularly conservative one.

"My theme, I call it 'Based Libertarianism,' it's a hardcore anti-government ethic, very rigid," he explains. "The good thing about the Proud Boy platform is it’s basically anarchist. End the government, abolish prison."

He adds, "Realistically, the Proud Boys are a fraternity, and if you go to any of our events that's what it looks like, more than any ideological movement."

Then again, most fraternities aren't listed under "General Hate" on the Southern Poverty Law Center's database of extremist groups. In 2018, Riverfront Times profiled the St. Louis Proud Boys in the aftermath of an organized boycott of a bar where the Proud Boys were meeting.

Also that summer, an “anti-fash collective” infiltrated a private Proud Boys Facebook group and published videos of “first-degree” initiates reciting the Proud Boy pledge, which goes: “I'm a Western chauvinist, and I refuse to apologize for creating the modern world."

Later that year, Furman took the vow as well. 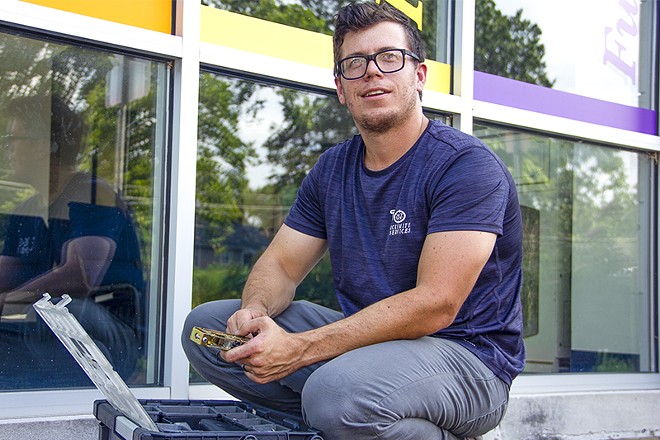 When asked about what the phrase means to him — or what prospective voters should take from a "Western chauvinist" on the ballot — Furman at first replies, "To put it in layman’s terms, it’s like saying, ‘I’m proud to be an American.'"

"To me, that doesn’t mean being a citizen of a government," he continues, "it means being the son or daughter of a culture. And culture to me is not racial. It’s character, traditions, and there are better traditions than others."

For an example of the non-racial aspect of culture, he chooses to argue from a fairly bigoted premise, noting that, "certain Islamic traditions are objectively less moral than some western traditions."

Furman contends that critics who see bigotry in his casual Islamophobia and ranking of human cultures are either “state propagandist liars” or simply parroting the “purposely-driven narrative” spread by the likes of CNN. His response also mirrors those of the other Proud Boys interviewed previously by the RFT, whose ideas about “Western civilization” similarly relied on broad stereotypes (frequently involving Islamophobia) and arguments framed as virtuous defenses to the absurdity of liberal politics.

This kind of logic has also drawn accusations of racism and white supremacy. As Keegan Hankes, a research analyst for the Southern Poverty Law Center's Intelligence Project, told the RFT, the Proud Boys' mixture of traditional conservatism and alt-right sensibilities “serve as a gateway for so many people who have gone on to other extremism.”

Indeed, Furman himself seems to acknowledge this dynamic, complaining later during the interview that he’s made guest appearances on podcasts featuring “alt-right people talking about the Jews all the time” — and yet, it’s these audiences which he believes he can convince to embrace his form of Based Libertarianism.

“I happen to think people on the right are more apt to be converted to a good, moral, ethical philosophy of government than someone who’s hardcore left,” he says.

It's a peculiar position, but even more so in 2020. At a time when the streets are filled with protesters calling for many of his own stated goals — including the abolition of prison and ending the drug war — Furman sees his potential supporters elsewhere, not just with podcasting anti-Semites, but in various offshoots and the far-right web, the places that attract fellow travelers who, he hopes, will follow a similar path to his vision of radical anti-government libertarianism.

They're the sort of folks who were likely the intended audience for a September 11 tweet from Furman’s official campaign account. That day, Cori Bush, who once lived in a car for several months after being evicted, had tweeted support for the Green New Deal and “dismantling environmental racism.”

Furman retweeted her, adding, “Shut the fuck up you homeless communist.”

Furman’s campaign account has also shared hashtags associated with Q-Anon and the “Boogaloo Bois,” another loosely organized far-right group that is obsessed with preparing for the “Boogaloo,” a kind of second American Revolutionary War that will overthrow a government corrupted by tyranny.

Still, in our interview, Furman insists he isn’t looking to start a confrontation with the government — at least, not yet. He says he’s planning a “heavily armed mask burning in front of the Health Department” as a campaign event set for October 3.

“It’s getting weird out there, with the mask mandates, all the stuff that we've just never seen before in a country that's supposed to be free,” he says, arguing that COVID-19 is “completely survivable” and that “it shouldn’t be controversial to say the government is cooking the numbers” of infections and death. In part, that’s why he’s sticking with the far right and the Proud Boys.

They’re his sort of people.

“They’re more reachable,” he says. “In order to be a libertarian, to believe you have what it takes to live in a free world, you have to have quite a bit of self-esteem, because there’s no one looking out for you. I find that people on the right, the far-right, whatever dumb things they believe, they usually aren’t lacking for self-confidence and self-esteem.”

Update, September 17: After this story was published, the chair of the St. Louis County Libertarian Party, LaDonna Higgins, wrote in an email that Alex Furman "has not and has never been an active member of the St. Louis County Libertarian Party." She added, "We had another wonderful candidate lined up to run in district 1 for Congress, but when Alex filed, she backed out. Our loss."