Understaffed During COVID-19, Missouri Prison Is a Danger, Union Says 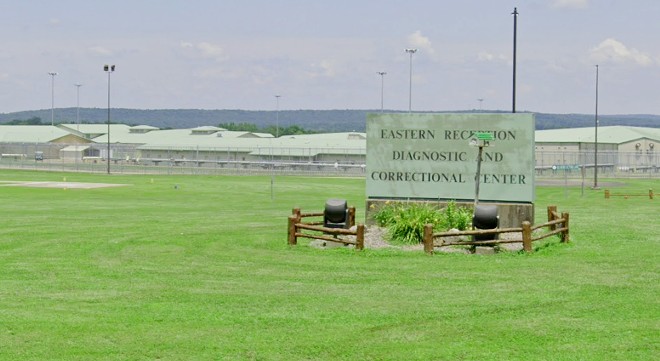 Staffing shortages have gotten so severe at the Eastern Reception Diagnostic & Corrections Center in Bonne Terre that earlier this month a secretary had to operate a control room that oversees one of the prison’s housing units, says Sherry Fish, who is a board member for the Missouri Corrections Officers Association and a former guard at the ERDCC.

Fish says the control room (which is supposed to be monitored by a corrections officer, not a secretary) has a bird’s eye view of the housing unit and is in control of all the locks on the unit doors.

The staffing shortages at ERDCC are in large part due to COVID-19. As of the end of August, the prison had 66 active staff cases, more than three times any other prison in the state.

Fish says she estimates that under normal circumstances the prison would have about 400 corrections officers on staff, but due to the pandemic, as well as longer-term, department-wide retention issues, the facility is running about 150 officers short.

“They’re hurting very badly, and no one’s listening to these people,” Fish says. She adds that low staff levels have officers working longer hours and stretching themselves thin. “They’re tired and they can’t do this anymore.”

When asked about these staff shortages at ERDCC, Matt Briesacher, Director of the Office of Professional Standards at MODOC, said that the department, “does not give out specific staffing numbers for work locations for security reasons.”

A prison guard currently working at Bonne Terre, who asked we not use his name for fear of retaliation, told the RFT about conditions at the prison, which is about an hour southeast of St. Louis. He confirmed what Fish said about non-custodial staff doing jobs usually done by corrections officers. He also says that the staffing shortages have gotten so severe that prison management is beginning to flout coronavirus-related policies. For instance, staff who come to work with a fever are supposed to return home. However, this guard says that when an employee comes to work with a high temperature, the sergeants who conduct the temperature checks just turn the AC up until the thermometer reads what they need it to read for the employee to work their shift.

Both Fish and the guard say that staff shortages are making the prison in Bonne Terre an increasingly dangerous place to work.

On the evening of August 20, officials from the prison guard union, inmates’ families and former guards began posting on social media that inmates at Bonne Terre staged a riot and took control of an entire housing unit.

@MODOCWatch1 tweeted, “Disturbance at #ERDCC. Being informed that 3 wings of a housing unit have been barricaded roughly an hour ago. 3 [corrections emergency response teams] activated to assist in already volatile situation with staffing levels at an all time low. Seems they are protesting lack of rec among other things.”

According to both Fish and the guard who spoke to the RFT, inmates took control of housing unit nine, barricading themselves inside for the better part of a night. Guards regained control of the unit early the next morning. The official MODOC alerts system, which provides notifications of major incidents, never made mention of the incident. However, a spokeswoman told Park Hills Daily Journal the incident began about 8:15 p.m., and the Corrections Emergency Response Team responded, quelling the uprising after nearly four hours.

“My understanding is that there were only two staff working that entire unit,” Fish says. The unit which was reportedly taken over holds as many as 288 inmates.

Less than a week later, on August 26, a female guard was viciously attacked by an offender, who used a laundry cart to knock her down and then began beating her head.

“We think he used her pepper spray can to beat her,” says Tim Cutt, the executive director of the Missouri Corrections Officers Association. “Her whole face was beat up. She was covered in her own blood laying on the floor.”

The MODOC alerts system did report this incident, adding that the guard was taken to the hospital and was later released to recuperate at home.

In addition to making work dangerous for guards, staff shortages can make an already grim life for inmates even worse. Without an adequate number of employees, offenders have to spend more time locked down. Meals and medical care can become delayed or irregular in its delivery.

This Thursday family members of individuals incarcerated at Bonne Terre plan a “Stand Up For Inmate Rights” protest at the prison.

“Bonne Terre is violating every right [inmates] have and they fought back only to be punished further,” the event description reads. “For weeks they have gone days without showers, no cleaning supplies, not being fed until 4pm, not allowed out of the cells even for the hour the law allows.”