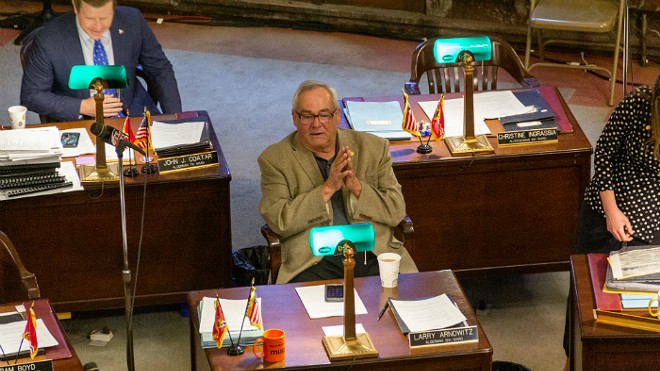 St. Louis Alderman Larry Arnowitz, who claimed he was brought down by "political people" who didn't want him to become mayor, has been sentenced to serve twelve months in federal prison and another six months on house arrest.

The 66-year-old pleaded guilty today to one count mail fraud, admitting he siphoned $21,197.85 out of his "Friends of Larry Arnowitz" campaign and used the money for personal expenses.

Arnowitz, a Democrat, represented the 12th Ward for more than seven years before he was indicted in March 2019 and resigned. Federal prosecutors say he illegally and repeatedly tapped his campaign donations for years, starting in June 2015.

"During the period of his scheme, Defendant used his campaign account like his personal piggy bank, making numerous cash withdrawals from the account in order to pay for improper personal expenses," assistant U.S. Attorney Hal Goldsmith wrote in a sentencing memorandum filed in advance of today's hearing in front of U.S. District Judge Stephen Clark.

In an example cited by prosecutors, Arnowitz wrote a $5,000 cashier's check from the account to help pay his mortgage in February 2019. At times, the contributions never even made it to the campaign account. The feds say he pocketed donations from political fundraisers he held in 2018 and 2019 at Sugar Creek Golf Course in High Ridge.

Goldsmith, who prosecuted ex-St. Louis County Executive Steve Stenger and his inner circle on corruption charges, wrote in court papers that Arnowitz tried to throw FBI agents off his trail by lying about withdrawals and then insisting any problems with his account could be cleared up with a small fine imposed by the Missouri Ethics Commission.

Arguing that the disgraced politico hadn't learned his lesson, Goldsmith cited a post Arnowitz made on NextDoor, in which he blames his prosecution on a conspiracy to keep him from becoming mayor.

"There was some political people who called the feds. higher ups who wanted me out. should have been reported the ethics commission rumor is i was making to many steps towards the Mayors race," Arnowitz wrote in a March 2019 post.

Goldsmith writes, "Defendant points his finger at imaginary individuals who worked to somehow stifle his political ambitions at becoming Mayor. This clearly evidences a lack of acceptance of responsibility on the part of Defendant."

In documents filed prior to today's plea and sentencing, Arnowitz's attorney Patrick Conroy asked for a sentence of six to twelve months house arrest. The ex-alderman's health is bad, including preexisting conditions of high blood pressure and diabetes that, combined with his age, make him especially vulnerable to catching COVID-19 while locked up, Conroy wrote.

The attorney noted that Arnowitz doesn't have a criminal record and his wife's health isn't good either. Federal sentencing guidelines set a recommended sentence of as many as eighteen months in prison, but the judge settled on the hybrid of a year behind bars and six months on house arrest.

Before he was elected to the Board of Aldermen in 2011, Arnowitz worked for nearly four decades in various city patronage jobs. The 12th Ward covers a strip of southwest St. Louis, including Boulevard Heights, Carondelet and Princeton Heights. Arnowitz was replaced by current Alderwoman Vicky Grass.