Of Course the McCloskeys Are Going to the GOP Convention 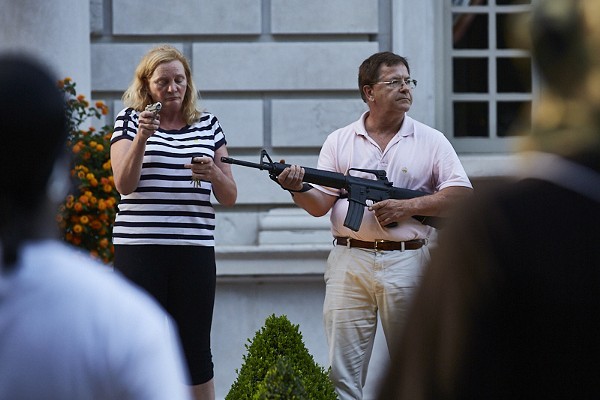 It was inevitable. The circle of bullshit that began when a rifle-toting Mark McCloskey yelled at a group of protesters in the Central West End to "Get the hell out of my neighborhood!" has arced through cable news, tabloids and the city prosecutor's office, and it has finally come to lodge itself where it belongs: next week's Republican National Convention.

Indeed, the fact that Mark and Patricia McCloskey — the now-infamous "St. Louis gun couple" — initially tried to play themselves off as supporters of the Black Lives Matter movement is just one more punchless punchline in the joke that is 2020.

"The Black Lives Matters movement is here to stay, it is the right message, and it is about time," one of the McCloskeys' attorneys, Al Watkins, said in a statement released June 29, one day after the scene of the couple pointing guns at protesters went viral and made national news.

Two months later, on Monday, Watkins confirmed to Wake Up To Politics creator Gabe Fleisher that Mark McCloskey "will be in full oratory splendor at the RNC."

Oh, how the worms turn.

In the weeks after the couple's armed confrontation, the case became yet another noxious node of the culture war, as Republicans (including President Donald Trump) showed just as little trigger discipline as the McCloskeys in jumping to support the couple's noble stand against, you know, unarmed people standing in the street.

It didn't matter that the couple's claim of a gate-smashing horde was refuted by video evidence; it didn't matter that the couple had waged a decades-long legal war on their neighbors, or that Mark McCloskey had pulled a gun in a previous circumstance where he was not in danger, but rather establishing by force what he believed were the bounds of his property (sidewalks be damned) in the ultra-wealthy and private enclave of Portland Place.

Let's also not forget about the Rosh Hashanah beehives, which in 2013 had the misfortune to be placed by a synagogue near the McCloskey mansion and which Mark McCloskey destroyed in a rage of entitlement.

“The children were crying in school,” Rabbi Susan Talve recounted to St. Louis Post-Dispatch reporter Jeremy Kohler. “It was part of our curriculum.”

Still. Mark McCloskey is the guy the Republicans want on stage: an entitled lawyer who, like his wife Patricia, is facing a felony charge for unlawful use of a weapon; a guy who has demonstrated himself as an easily flustered boomer with an overcompensating arsenal and an underdeveloped sense of empathy, a guy who sees other people as a threat to his cavernous edifice to unfathomable wealth ...

Huh. You know, it suddenly makes a kind of sense. The McCloskeys are perfect representations of Trump's Republicans, and we wish them the best.

Have a great convention, y'all. Don't come back too soon.