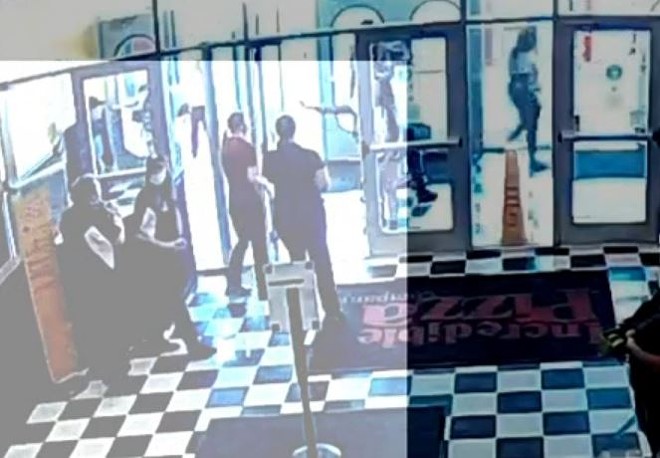 A customer who refused to wear a mask revealed herself as an incredible asshole after she turned her outrage — and pepper spray — on three employees at St. Louis' Incredible Pizza Company in South St. Louis County on Sunday, police said.

In the end, the maskless macer, identified by St. Louis County police as St. Louis resident Antoinette Windon, 27, was arrested and issued a summons for assault.

"It was the worst pain I had felt in my life, just excruciating, burning obviously in my nose and mouth," an employee of the business told KMOV.

On Monday, the station published a clip of the store's surveillance footage that showed a confrontation between the staff and a group of customers.

While the footage in the clip below isn't crystal clear, at the nine-second mark a person at the door appears to raise an outstretched hand toward those still inside. Moments later, the people gathered at the door scatter in apparent distress.

Insane. @stlcountypd is investigating after surveillance video shows a customer at Incredible Pizza in Affton macing employees after she and others were asked to leave for refusing to wear masks. Employees say the group assaulted them prior.


All over a mask.

Upon investigation, police said that the arrest was preceded by an altercation which "broke out after customers of the business were told to leave the business due to not wearing masks."

"According to witnesses and video surveillance," the statement continued, Windon "sprayed pepper spray/mace at employees of the business."

Effective July 3, both St. Louis County and St. Louis City enacted a mandatory mask-wearing rule for everyone over the age of nine; the rule applies in all indoor facilities and outside when social distancing is not possible.

The ongoing controversy over masks continues in Missouri, where the outbreak is very much not under control.

Missouri is among the top states showing skyrocketing average cases in recent weeks; more than a dozen members of the Cardinals have tested positive for coronavirus and are quarantining in Milwaukee; more than 500 vulnerable people in nursing homes have died since the outbreak's start, and vulnerable people who are not currently in nursing homes must contend with the possibility that a trip to the store could put them in contact with an Ozark party bro.

Even on election day in St. Louis, there had to be one person to make a noble stand for liberty by literally refusing to vote if it meant wearing a mask or being inconvenienced by voting outside the polling place.

That guy threw away his chance to vote. Antoinette Windon got arrested and had her behavior splashed over the local news.

But hey, at least they didn't wear a mask.