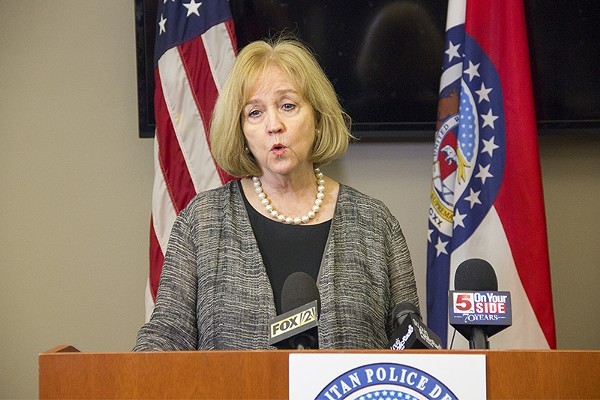 The City of St. Louis will close businesses that flout public health guidelines meant to slow the spread of coronavirus, the mayor's office announced on Monday.

In a press release Monday afternoon, Mayor Lyda Krewson's office notes that some businesses in St. Louis "have continued to openly disregard rules that require people to socially distance and wear masks," even after some have received cease and desist letters from the city's Department of Health.

"Later on this afternoon or first thing tomorrow morning, our Health Department will be issuing letters to a few of those businesses saying that they have to close for two weeks," Krewson said during Monday's COVID-19 briefing. "This is a very serious step that we never wanted to have to take. But we are seeing increases in cases, significantly, we are seeing high hospitalization numbers — 40 on average, seven-day — and we have tried to bring people in to compliance. And so at this point we believe that those businesses that are not complying will need to close for two weeks."

The statement makes no specific mention of which businesses will be closed, and Mayor Krewson did not name them during her briefing. Jacob Long, a spokesman for the mayor's office, tells RFT in an email that they "hope to be able to identify the businesses once we feel they have received proper notice."

The statement does say, however, that "news reports and social media posts" have made evident that the businesses have refused to be in compliance. That's notable, as there is a video that's been making the rounds since it was shared over the weekend of a packed dance floor at the Wheelhouse, short on masks or anything remotely resembling social distancing.

The video is a screen capture of an Instagram story originally shared by the account @wheelhouse_nightlife. Whether due to the ephemeral nature of Instagram stories or a deliberate decision to pull it in the wake of the backlash, the story is no longer available from that account.

But Twitter user @And_Ark shared the screen capture of the story on Sunday afternoon, and the video has since been viewed nearly 50,000 times.

"Hey @WheelhouseSTL, we're in the middle of a pandemic," that user wrote in a post accompanying the video. "WTF is this?"

Hey @WheelhouseSTL, we're in the middle of a pandemic. WTF is this? pic.twitter.com/iUsxWRFsrM

One of those who saw the video, it would seem, is the mayor herself.

"We have seen the videos on social media from over the weekend of bars and nightclubs obviously flouting our mask mandate and social distancing requirements," she wrote on Twitter early Monday morning. "This is both reckless and unfair to other businesses working hard to do it right.
@CityofSTLDOH will be taking action today."

Though it appears to mostly serve as a promotional vehicle for the bar, it is not immediately clear who operates the @wheelhouse_nightlife account. The Wheelhouse's official Instagram account is @wheelhousestl. A call to the bar for clarification was not answered, and as of press time we've not heard back after leaving a message. We will update this post if that changes.

During Monday's briefing, Krewson described the decision to close businesses that refuse to comply with public health mandates a "surgical approach."

"So many businesses have been working so hard to follow the guidelines. We're trying to avoid shutting down a whole classification of businesses," she said. "We don't think that's the fair thing to do. We're just using what I would call more of a surgical approach to this rather than what I'd call a blanket approach."

The specific classification of businesses to which Krewson refers is, more than likely, bars and nightclubs. Multiple states and cities have moved to close the bars in their borders in recent weeks as it has increasingly become clear that drinking establishments are alarmingly effective at causing COVID-19 to spread. The fact that they involve people hanging out indoors for long periods of time, breathing in one another's germs, coupled with alcohol's tendency to make otherwise careful people drop their guard, has caused them to become targeted by city and state officials alike.

Bars even came up in a series of new mandates announced today by St. Louis County Executive Sam Page, who has ordered that they be closed each evening by 10 p.m. going forward.

The moves by both Page and Krewson come as Missouri has seen increasing numbers of COVID-19 cases in recent weeks, putting up five record-high numbers of cases just last week alone.

Some of those cases have made it into the Wheelhouse's orbit already. On June 26, the bar's ownership, which also owns the Midwestern and StartBar, abruptly announced that all three establishments would be closing temporarily due to COVID-19 concerns. At that time, owner Stephen Savage told St. Louis Magazine that two employees and one customer had tested positive for the virus.

“We were trying to keep our 225 employees busy, trying to do our part to help the city's coffers, but realized that, all things considered, maybe now is the time that we should be closed," Savage told St. Louis Magazine.

All three bars reopened on July 10.