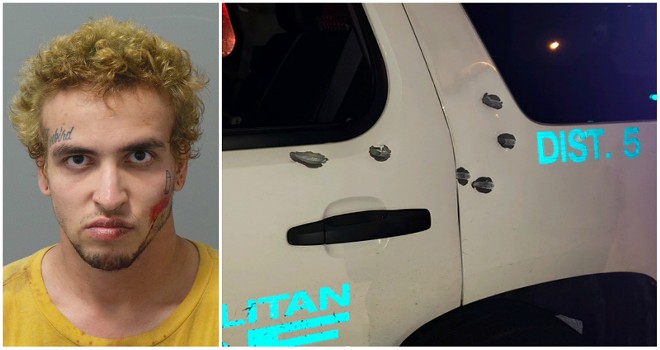 A 23-year-old opened fire on St. Louis cops and later crashed into a police car during the ensuing pursuit, authorities say.

Peter Webb, whose address was listed as Springfield, was taken into custody early this morning and charged with multiple felonies, including three counts of first-degree assault or attempted assault on a police officer.

Police say officers were removing "cruisers" from the Crown Mart on North 13th Street in the southeast corner of the Old North neighborhood. Shortly after 1 a.m., Webb drove past and fired multiple shots at a police vehicle, authorities say. One of the officers, a 49-year-old while male, saw Webb shoot and started chasing him, continuing as Webb shot his vehicle, police say.

At the intersection of South 14th Street and Chouteau Avenue — just under two miles south — Webb crashed into the officer and then into a traffic light, police say. He ran but was apprehended by two other officers.

Police say they recovered a sawed-off shotgun in his vehicle. One officer was hit in the elbow by shrapnel. Another injured his knee in the foot chase. The officer involved in the crash suffered a head injury, but refused treatment.

Webb was jailed without bond.