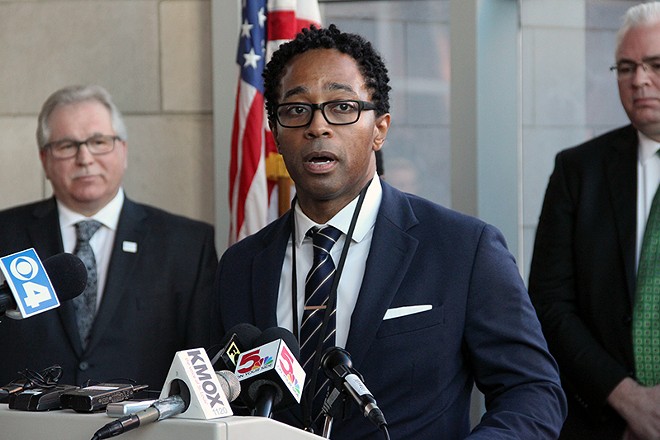 St. Louis County Prosecuting Attorney Wesley Bell has asked the U.S. Attorney to investigate the conduct of attorney Jerome Dobson, who is representing police Lt. Col. Troy Doyle in a racial discrimination complaint against the county.

Reached by the RFT, Dobson said this was the first he had heard of that referral and that he has not heard from the U.S. Attorney.

On Friday, Dobson announced he had filed a complaint on Doyle’s behalf with the Equal Employment Opportunity Commission, the first step toward a lawsuit. The complaint alleges that County Executive Sam Page promised to see to it that Doyle would be the county’s next police chief, but backed off when he received “pushback” at the prospect of a Black man taking over the police department.

Page’s team was quick to fire back against the allegations on Friday, releasing a letter from County Counselor Beth Orwick to Dobson, accusing the attorney of having attempted to “effectively extort” the county.

Sam Alton, Bell’s chief of staff, said the decision to refer the matter to federal prosecutors was made after receiving information from Orwick’s office.

“We are aware of the situation involving Mr. Dobson,” Alton tells the RFT. “The information we received was very concerning, and we have referred this matter to the U.S. Attorney’s Office."

It’s not clear if federal prosecutors will agree to investigate.

In her letter, Orwick charged Dobson had put forth “a scheme designed to threaten embarrassment and disrupt the upcoming election. You have not alleged facts that we believe support a claim of discrimination.” She accused him of having demanded a $3.5 million settlement in exchange for hiding documents “in your desk drawer.”

Along with the county counselor’s letter, Page spokesman Doug Moore released a voicemail Dobson left for Winston Calvert, Page’s chief of staff, in which the attorney says, “It is our intention to file before the upcoming primary."

Dobson tells the RFT, “Our request was within normal practice of attorneys seeking to resolve a case. If that’s extortion there are thousands of attorneys committing extortion every day.”

Dobson says “we stand by the facts” put forth Friday in which Doyle claimed he was racially discriminated against in the March 19 decision by the county Board of Police Commissioners to hire Chief Mary Barton over him. In the complaint, he accused Page of reneging on a commitment to his appointment because of outside pressures related to campaign donors, who didn’t want a Black chief.

Page has stated that he had supported Doyle for police chief, but that the board acted independently of his views in its selection of Barton.