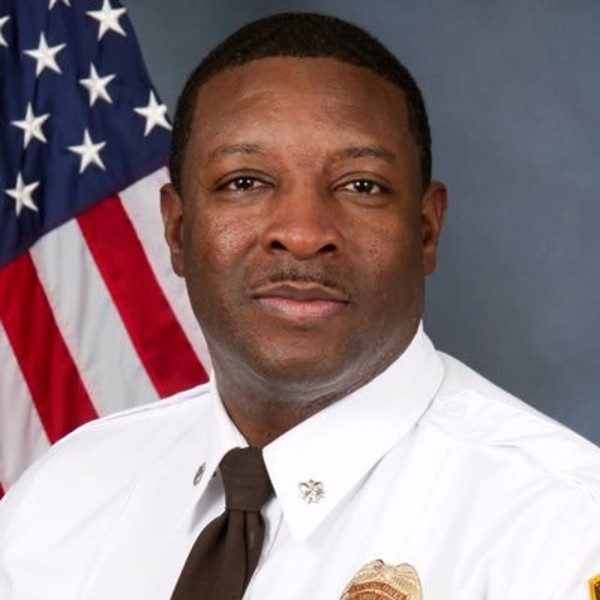 Update: Doug Moore, a spokesman for St. Louis County Executive Sam Page, has responded. Moore provided a letter (embedded at the bottom of this story) from County Counselor Beth Orwick, which accuses attorney Jerome Dobson, who represents Lt. Col. Troy Doyle, of using the upcoming county executive race, set for an Aug. 4 primary, to try to extort $3.5 million from the county. Moore also provided a voicemail that Dobson left for Page's chief of staff Winston Calvert in which he warns of their intention to file a charge of racial discrimination, noting "It is our intention to file before the upcoming primary."
Moore also pointed to a letter of reprimand from the Missouri Supreme Court to Dobson for a previous incident involving what the county says was similar conduct.
In a statement, Page says, "Troy Doyle was my choice for chief. The commissioners, whose independence is why I nominated them, chose someone else."
The original story continues below:

St. Louis County police Lt. Col. Troy Doyle has filed a charge of racial discrimination against county for passing him over for the position of police chief on March 19 in favor of police Chief Mary Barton.

Jerome Dobson, a St. Louis employment discrimination attorney, filed the complaint with the Equal Employment Opportunity Commission (EEOC), which can provide Doyle a right to sue after 180 days. The EEOC complaint cannot be released in writing, but Dobson leveled explosive allegations against County Executive Sam Page in an interview Friday with the Riverfront Times.

Dobson says Page had promised Doyle that he would see to it he selected as the next police chief.

“Dr. Page told Troy Doyle on a number of occasions that the police board will do what I tell them to do,” Dobson says.

The RFT has contacted a spokesman for Page for comment. We'll update the story if we hear back.

Dobson claims Page arranged interviews for Doyle with prospective police board members before Page had named them to the board but then told Doyle that he had received “pushback” from “certain members” of the St. Louis Police Foundation over selecting a Black chief.  The Police Foundation is a private group of police boosters that provide financial support and goods to the St. Louis County and city police departments.

“Troy Doyle was much more qualified than Mary Barton to be police chief of St. Louis County,” Dobson says. “He outranked as lieutenant colonel — she was a captain — and he not only held that rank for seven years but was the leader chosen as the go-to for projects for county police such as managing a crisis at the Jennings police department or overseeing the county jail after four people died there without transparency.”

Dobson specifically singled out Page, quoting what he says his client told him, for having made promises to Doyle that he claims were broken.

“Dr. Page had told Troy in 2019 that he wanted him to be the next chief of police,” Dobson says. “Page invited Troy to his house and told him he was the right person for the job, it would be the right thing to do and it would be historic.”

Dobson says Page told Doyle he wanted him to meet with several influential St. Louisans, including Dr. Donald Suggs, publisher of the St. Louis American, as well as retired Judge William Ray Price Jr. and local attorney and CPA Michelle Schwerin. At the time, Price and Schwerin had not been appointed to the board, but Page indicated to Doyle they were under consideration.

Dobson says Price or Schwerin indicated to Doyle that he appeared a qualified candidate, but it is not known how they voted on the police chief selection. Even more inflammatory is Dobson’s allegation of what Page told Doyle about what happened next.

“Sam told Troy a few times, ‘I’m going to pull you across the finish line,’” Dobson says. “Then this January, after he had a meeting with certain members of the Police Foundation, he tells Troy he’s getting push back on appointing a Black police chief.”

According to Dobson, “Troy said Page told him that he was shocked by what one of the foundation members had said of a racial nature. Dr. Page told Troy, ‘I felt like I was back living in the ’60s.’”

Dobson also claims that Page told Doyle he was “having trouble getting large contributions” from corporate donors in his campaign for county executive.

“Within a couple of months after Barton’s selection on March 19, a large corporation made a significant contribution to Page’s campaign.” Dobson says.

He declined to name the donor. A review of campaign records on the Missouri Ethics Commission show that Page received multiple sizable donations from corporations in the months following Barton’s selection.