The McCloskeys Are Charged for Pulling Guns on Protesters 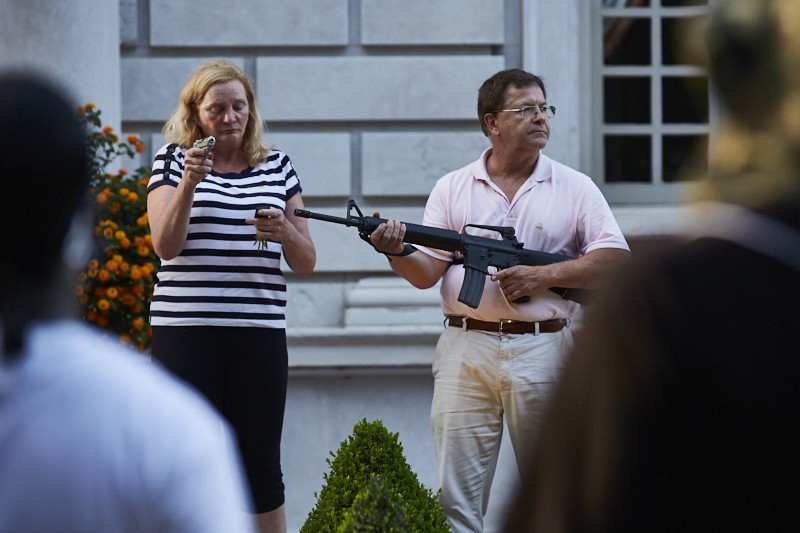 Mark and Patricia McCloskey, the gun-wielding attorneys of the Central West End, have each been charged with a felony for pulling weapons on protesters who marched past their mansion last month.

St. Louis Circuit Attorney Kim Gardner on Monday afternoon filed the charges of unlawful use of a weapon – exhibiting.

"It is illegal to wave weapons in a threatening manner at those participating in nonviolent protest, and while we are fortunate this situation did not escalate into deadly force, this type of conduct is unacceptable in St. Louis," Gardner said in a statement.

On June 28, the McCloskeys confronted protesters who were walking on Portland Place and the sidewalk on their way to demonstrate in front of Mayor Lyda Krewson's home, a couple of blocks away.

As the first few protesters entered the gated neighborhood, an armed Mark McCloskey screamed at them to leave.

"Get the hell out of my neighborhood!" he shouted from the couple's raise patio.

Both McCloskeys pointed guns at the protesters, who told police they were particularly worried about Patricia, due to her "finger being on the trigger, coupled with her excited demeanor," according to a probable cause statement.

The move to prosecute the couple is sure to infuriate right-wing politicians all the way up to Donald Trump. The president has backed the McCloskeys in his war on police protests, embracing the couple's narrative that they were under attack, even though video shows Mark McCloskey initiating the confrontation.

And the McCloskeys have given numerous interviews, claiming they would have been murdered with their pets and their home set on fire had they not faced down the "mob" of protesters. It's worth noting that none of their neighbors' homes or anyone along the route during the previous 90 minutes of protesting were murdered or had their homes burned. Their pets were not harmed either.

In a statement, Gardner said the decision to charge the McCloskeys was made after "a thorough investigation" with St. Louis police. In apparent nod to the criticism from Republican politicos, she noted that she had also charged protesters in recent weeks, including a man who punched a counter protester during a demonstration in front of the King Louis IX statue the day before the McCloskeys Central West End showdown.

"We must protect the right to peacefully protest, and any attempt to chill it through intimidation will not be tolerated," Gardner said in a news release.

She added that she would be open to considering the McCloskeys for a diversion program that could "reduce unnecessary involvement with the courts."

The McCloskeys will be issued a summons to appear in court, which means they won't have to be arrested and booked.