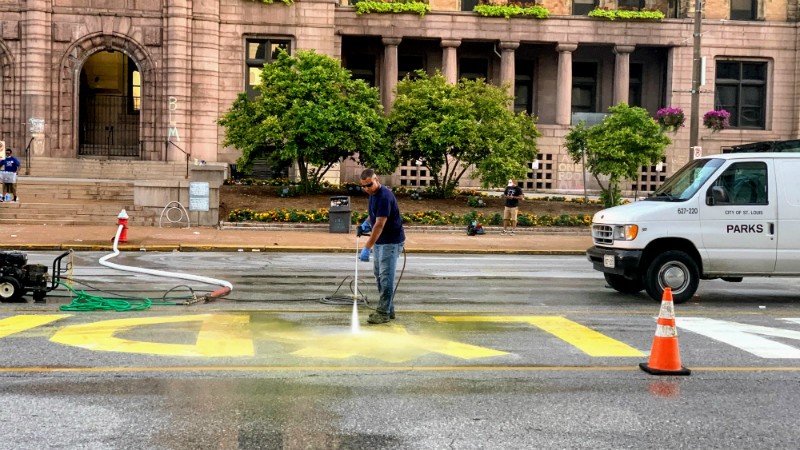 Arriving shortly before 4 a.m., dozens of officers moved in and ordered people to leave. Police Captain Renee Kriesmann, who commands the Fourth District, says people left peacefully. There was at least one media report of a large fight earlier, but that appears to be false according to police and witness accounts posted to Twitter.

"This is an important building, it's a building that runs our city government," Kriesmann says. "Getting it reopened and back to normal was important to everybody."

Protesters calling for Mayor Lyda Krewson's resignation had been camped in front of City Hall since Wednesday, bringing in tents and even some furniture.  Krewson has been a target of protests for two weeks. During a briefing on June 26 on Facebook Live, she broadcast the names and addresses of advocates for defunding the city's police department. The video was later deleted, but backlash against the doxing was swift and has included protests outside her home in the Central West End.

On the first night of the Occupy City Hall STL camp, police say a city tow truck driver was hit with the barrel of an assault-style rifle while trying to tow a vehicle from the scene early Thursday morning. Kriesmann says police took a suspect in that case into custody several hours prior to clearing the camp on Friday morning. Police have not named the person.

Protesters had promised to stay until Krewson resigned. They painted in massive block letters "LYDA RESIGN" on Tucker Boulevard. Several dozen people had filled the camp, although a smaller number stayed overnight Thursday into Friday. Street medics had set up tents, stocked with basic supplies and water at the south end of the encampment. Video posted by a group associated with the medics, MARCH St. Louis, showed police officers  photographing people trying to pack out what they could before police confiscated the rest.


Police had staged riot cops nearby but ended up using dozens of officers in the bicycle unit to do most of the enforcement. Kriesmann says the City Hall grounds are considered a city park, and police were enforcing a curfew that forbids people from staying overnight in parks.

By 5:45 a.m., all the tents had been removed, and dozens of bike cops pedaled away from City Hall. A small number of police officers remained to block off commuter traffic on Tucker while city workers with pressure washers and brushes scrubbed the LYDA RESIGN painting off the street. 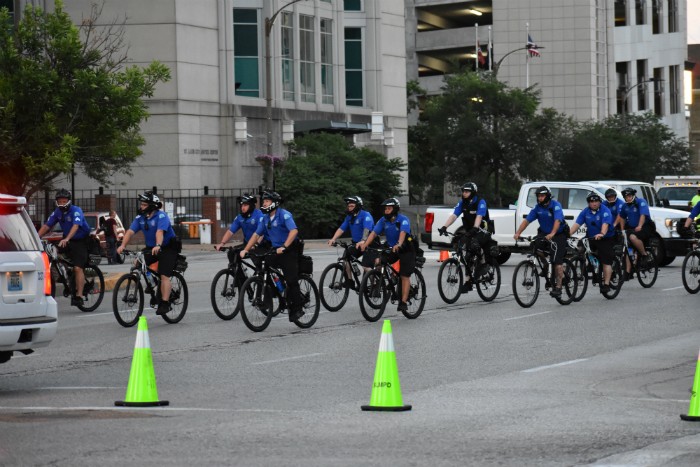