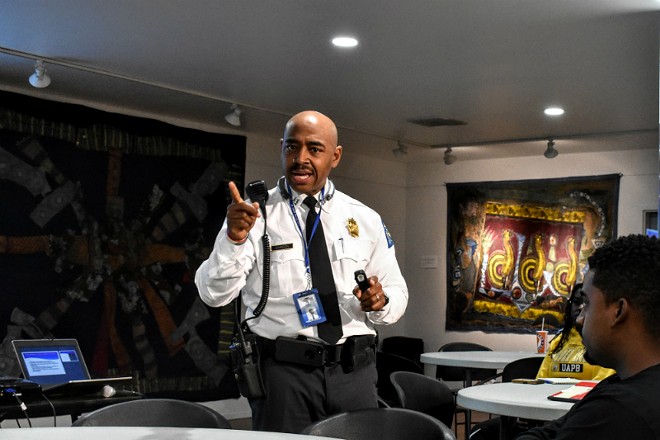 A popular St. Louis police supervisor repeatedly skipped out on his duties to work a side job in private security, authorities say.

Captain Perri Johnson was charged Tuesday with one felony count and three misdemeanor counts of stealing.

Johnson, who has been with the department for more than 27 years, had commanded the Sixth District at the northern tip of the city, but a source previously told the RFT he'd been pulled from that duty as questions about double-dipping surfaced.

A department spokesman confirmed that Johnson is still on the force but declined to provide any details about his current status.

An internal affairs investigation detailed 37 occasions, totaling 129.75 hours, that Johnson was working side jobs while on the clock for the city, according to a probable cause statement filed by a prosecutor in the St. Louis Circuit Attorney's Office. The majority of the double dipping occurred while he was doing security for Spire Inc. gas company, prosecutors say. He also provided security for Saint Louis University and the advertising firm Osborn Barr on city time, according to the charges.

Johnson is also accused of billing the city for eight hours while he was on non-work trip in August 2019 to Washington, D.C.

Charismatic, the police captain has often served as a public liaison for the department, speaking to community groups and reporters.

Court records show a criminal summons, but no arrest warrant has been issued for Johnson.