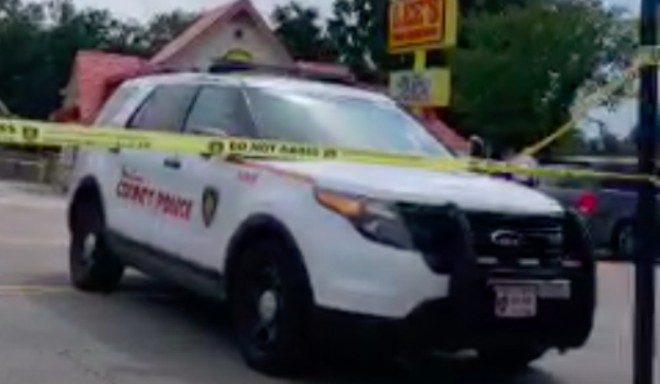 Editor's note: This story has been updated with additional information from police.

A carjacking suspect is in the hospital after he was hit by a St. Louis County unmarked police vehicle at the end of a high-speed chase, police say.

The incident began about noon in the 500 block of Clara Avenue in the city. A 25-year-old told city police officers he was walking to his home when three people approached and asked to use his phone. One the three then pulled a gun and ordered him to give them his car keys, police say. He handed them over, and the carjackers hopped in his 2017 Mazda 3 and drove off.

The stolen Mazda was soon spotted from a police helicopter in the Castle Point neighborhood of north St. Louis County. County detectives responded and confirmed it was the car, police say. County police Sgt. Ben Granda tells reporters that at some point someone in the Mazda fired a gun at the unmarked police vehicle and officers returned fire. In a news release this evening, police say, police had turned on lights and sirens near the intersection of Empress Drive and Lord Drive, and that's when someone in the Mazda shot at them and a detective fired back. No one was hit.

The Mazda kept going into the 7200 block of Natural Bridge Road. It was there that the driver pulled behind a Lee's Famous Recipe Chicken, drove the wrong way through the drive-thru and crashed into a speaker and concrete pole, police say. He then got out and was on foot when he was hit by the county police vehicle.

Granda initially said there were reports that the man's injuries were "life threatening," but police were still trying to confirm information about his condition. Police have since confirmed the nineteen-year-old is in critical, but stable condition. The other two suspects, ages sixteen and seventeen, were taken into custody.

"In an ideal world, this would have ended with a traffic stop twenty minutes prior instead of a car accident behind this business," Granda says.

The investigation was underway late this afternoon, and Granda says police are still piecing together the full picture of what happened.