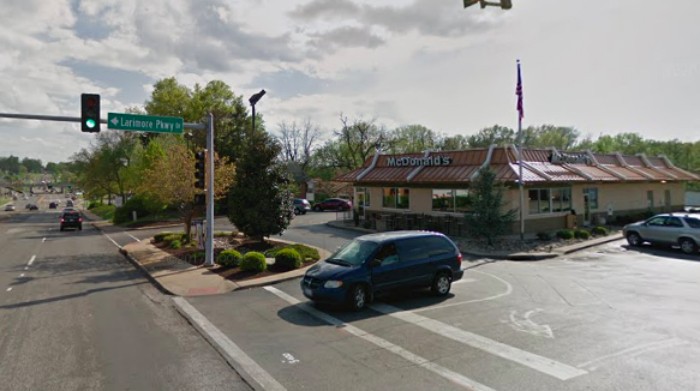 A man who carjacked a 67-year-old grandfather and his ten-year-old grandson — and then hit the grandfather with his own truck — was shot dead by an off-duty City of St. Louis Sheriff's deputy, authorities say.

The chaotic series of events began about 6:35 a.m. today at a McDonald's in the 11100 block of Bellfontaine Road in Spanish Lake.

The grandfather and grandson were in the parking lot of the restaurant when the man threatened with them with a weapon — St. Louis County Police Officer Tracy Panus told reporters she wasn't sure what kind yet — and stole their black pickup truck, authorities say.

At a news conference, Panus said the carjacking suspect drove off but then spotted the victims and made a U-turn, cutting across southbound lanes onto the sidewalk where he hit 67-year-old. The truck then continued on, barreling into the yard of a nearby home, where the driver crashed and bailed out on foot, according to Panus.

Two St. Louis County police officers were driving on Bellfontaine when they spotted the grandfather and grandson and stopped to help. The off-duty city sheriff's deputy was also driving in the area and saw the truck hit the 67-year-old, Panus says.

"The sheriff's deputy sees this happen, and he chases him," Panus says.

The deputy followed the suspect as he bolted from the truck and ran behind a house. Panus says it's not yet clear what happened after, but the county police officers heard a gunshot. When they made it around to the back of the house, they found the carjacking suspect down. He was transported to the hospital and has died.

The grandfather was also transported to a hospital, but Panus says his injuries aren't considered life threatening. The ten-year-old wasn't injured, she says.

The investigation is still underway, and police haven't released any names of those involved. The sheriff's deputy is 51 years old and has nineteen years of experience.

In a statement, St. Louis Sheriff Vernon Betts promised to cooperate with the county's investigation. The deputy has been placed on administrative leave pending the results of that investigation.