Who's the Son of a Bitch Who Stole Civil Life's Giraffe? 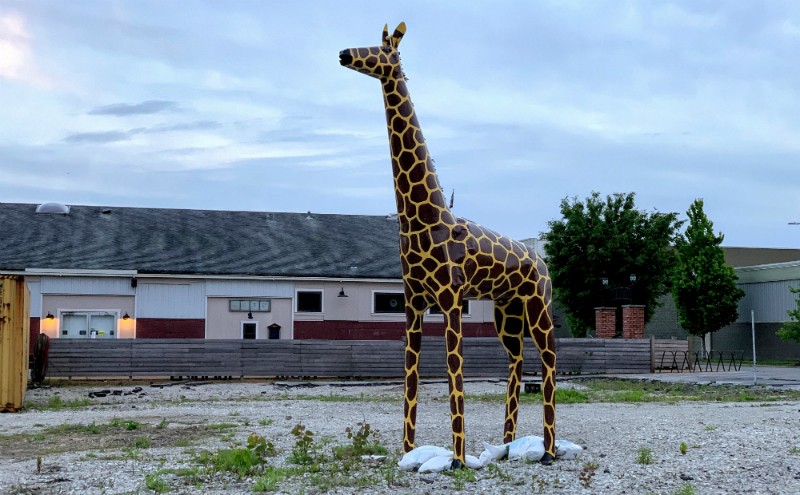 Update: Civil Life Brewing Co. owner Jake Hafner is offering a $1,000 reward for information leading to the conviction of the giraffe-napper. He'll also donate $1,000 to Northside Community Housing to save the Sara-Lou Cafe. The original story continues below.

Time to fess up. Which one of you jerks took Civil Life's giraffe?

The towering metal mammal stood proudly in the gravel lot north of the Tower Grove South brewery — until about 11:20 p.m. Thursday. In a video posted to Civil Life's Twitter page, a white box truck drives onto the lot, mostly obscured by three shipping containers. In the dark, you can see the top of the truck as it parks, and then the giraffe is tipped over and apparently loaded into the back of the truck.

The giraffe has been sort of a running joke at Civil Life (3714 Holt Ave.), standing in the lot where the brewery had hoped to expand before an incentive package with the city fell through. Instead hosting a big new facility, the lot became Jake's Dinosaur Park (a handful of metal dinosaurs eventually migrated out of the lot and back to the brewery).

There used to be a chain-link fence surrounding the "park," but that came down in March, when it seemed like there were better uses for the money during an economy-busting pandemic. That left the giraffe defenseless, protected only by the problematic logistics of stealing a sixteen-foot-tall statue. It was apparently no match for a box truck and a dark heart.

Civil Life owner Jake Hafner tells the Riverfront Times he left a message with police and plans to file a report.

"I hate to be upset about this, but it's one of those things, man," he says. "The giraffe was there to make people smile."

He noticed it was gone as soon as he arrived at work and quickly posted the sad news on social media. He says he feels a little silly feeling bad about a stolen giraffe, given everything else happening, but it had become a needed bright spot in the neighborhood.

He says, "I know there are more important things in the world, but I'm pretty bummed."

Get to work, St. Louis. Bring this giraffe home.

It was a white box truck that that stole @parkjakes giraffe at 11:20 pm. Well that shouldn’t be too hard to find. 🤦‍♂️ Trying to see if the neighbors have a better video. pic.twitter.com/B4qCWzzHmB