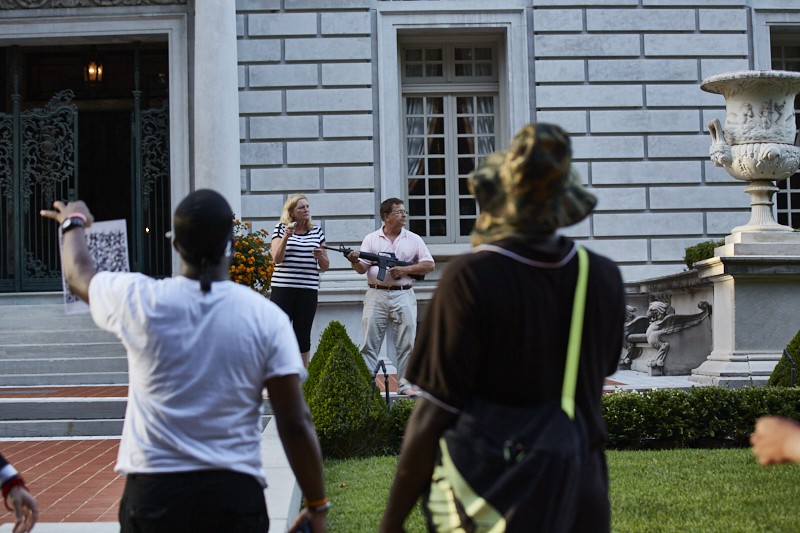 In something of a surprise twist on an already bizarre story, the St. Louis couple who pointed guns at protesters walking by their Central West End mansion during a march to the mayor's house yesterday have released a statement in support of those protesters.

The statement, released through their attorney, Al Watkins, aims to "set the record straight" regarding the incident, which was captured on film from multiple angles and has since become national news.

"The peaceful protesters were not the subject of scorn or disdain by the McCloskeys," the statement says in part. "To the contrary, they were expecting and supportive of the message of the protesters."

The statement claims that the McCloskeys were "in fear of imminent harm," however, due to "the actions of a few individuals who chose to exploit the otherwise peaceful protest" with "actions of violence, destruction of property and acts of threatening aggression."

“The Black Lives Matters movement is here to stay, it is the right message, and it is about time,” Watkins says in the statement. “The McCloskeys want to make sure no one thinks less of BLM, its message and the means it is employing to get its message out because of the actions of a few white individuals who tarnished a peaceful protest.”

A police report which lists the McCloskeys as victims gives their account of the incident:

The victims stated they were on their property when they heard a loud commotion coming from the street. When the victims went to investigate the commotion, they observed a large group of subjects forcefully break an iron gate marked with “No Trespassing” and “Private Street” signs. Once through the gate, the victims advised the group that they were on a private street and trespassing and told them to leave. The group began yelling obscenities and threats of harm to both victims. When the victims observed multiple subjects who were armed, they then armed themselves and contacted police. The investigation is ongoing.

That account, however, is at odds with the video evidence.

In a clip from a livestream that was shared on social media, the large and loud crowd of protesters can be seen entering the gated neighborhood not by smashing a gate, but rather by opening it.

The gate is opened by the first protester at the seven-second mark of the video, and more protesters file in behind him. Within seconds, Mark McCloskey's voice can be heard screaming from a house to the protesters' right, announcing that this is private property and yelling, "Get the hell out of my neighborhood!"

At the 22-second mark, the person filming the video remarks that McCloskey has a gun.


That would mean, if the account they told police is to be believed, it took a grand total of, at most, fifteen seconds from the moment they allegedly watched protesters break down a gate (which, again, they had not broken down but rather opened and walked through) for the following things to happen:

-"[T]he victims advised the group that they were on a private street and trespassing and told them to leave."

-"The group began yelling obscenities and threats of harm to both victims."

-"[T]he victims observed multiple subjects who were armed, they then armed themselves."

In an interview with KSDK, Mark McCloskey elaborated on what allegedly happened within those 15 seconds:

[A]s soon as I said this is private property, those words enraged the crowd. Horde, absolute horde came through the now smashed-down gates coming right at the house. My house, my east patio was 40 feet from Portland Place Drive. And these people were right up in my face, scared to death. And then, I stood out there. The only thing we said is, "This is private property. Go back. Private property. Leave now."

At that point, everybody got enraged. There were people wearing body armor. One person pulled out some loaded pistol magazine and clicked them together and said that you were next. We were threatened with our lives, threatened with a house being burned down, my office building being burned down, even our dog's life being threatened. It was, it was about as bad as it can get. I mean, those you know, I really thought it was storming the Bastille, that we would be dead and the house would be burned and there was nothing we could do about it.


None of that can be heard in the video. What can be seen instead is McCloskey holding a gun and repeatedly screaming "private property" and "get out" while someone repeatedly responds "calm down" and others note that they are on the sidewalk.

In the KSDK interview, McCloskey also says that he "was very, very careful I didn't point the rifle at anybody," which is also at odds with the video and photographic evidence.

A photo shared by KMOV's Alexis Zotos shows that the gate to the community was indeed broken by someone at some point in time. But contrary to his statement, it does not appear it happened before McCloskey armed himself.

Statement from attorney Mark McCloskey:
“A mob of at least 100 smashed through the historic wrought iron gates of Portland Place, destroying them, rushed towards my home where my family was having dinner outside and put us in fear of our lives.” pic.twitter.com/q3GW4Mmloz


St. Louis Circuit Attorney Kim Gardner said Monday morning that her office is looking into the incident and deciding whether to file charges against the couple.

In a statement, Gardner says she is "alarmed at the events that occurred over the weekend, where peaceful protesters were met by guns and a violent assault." She concluded her statement by saying, "Make no mistake: we will not tolerate the use of force against those exercising their First Amendment rights, and will use the full power of Missouri law to hold people accountable."

The reason the protesters were in the neighborhood was to demonstrate outside of Mayor Lyda Krewson's house, who is facing calls to resign after broadcasting the names and addresses of several activists who are calling for police reform in a since deleted Facebook live video.

Krewson has since apologized.