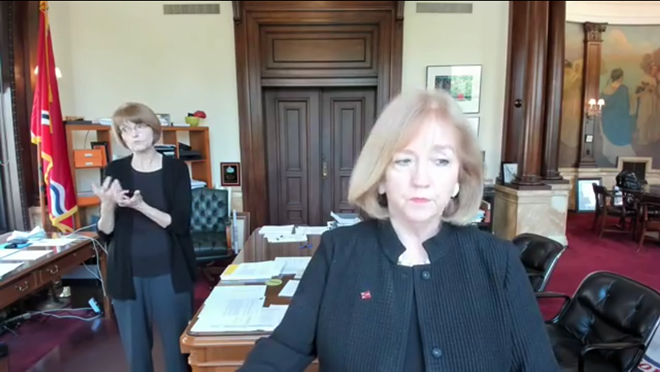 In an effort to be transparent and accessible to the public during the Covid-19 pandemic, for more than three months now I have been doing tri-weekly community updates on Facebook. Tonight, I would like to apologize for identifying individuals who presented letters to me at City Hall as I was answering a routine question during one of my updates earlier today. While this is public information, I did not intend to cause distress or harm to anyone. The post has been removed.

St. Louis Mayor Lyda Krewson took some time out from a public briefing on COVID-19 Friday to read aloud the full names and addresses of several of her own constituents who are calling for police reform.

The briefing was aired publicly on Facebook Live, and a recording was online for about three hours before it was deleted. The Riverfront Times has obtained a copy. Near the end of the briefing, a question from a woman named Rachel is read aloud to the mayor by her spokesman Jacob Long, who is off-camera.

"Rachel has a question, Mayor, about your meeting today with some demonstrators outside City Hall," Long says. "She wants to know: How was that meeting, and what did you talk about?"

"Well thank you for that, Rachel," Krewson responds. "So there was a demonstration here, in front — sort of on Tucker and Market here — and the demonstrators wanted to meet with me. So I went outside City Hall, in the circle on the Tucker side of City Hall. The conversation wasn't really a two-way conversation, I'll be honest with you, because there was a very loud, um, very loud response from the demonstrators. And so they gave me some papers about how they thought, uh — in fact I'll go pick it up off my desk, hang on."

At this point, Krewson walks across her office, retrieves a stack of papers from her desk, and then returns to the camera.

"So they presented some papers to me about how they wanted the budget to be spent," Krewson says while putting on reading glasses. "Here's one that wants $50 million to go to Cure Violence, $75 million to go to affordable housing, $60 million to go to Health and Human Services and have zero go to the police. So that's [REDACTED] who lives on [REDACTED] wants no police — no money going to police."

From this point in the video, Krewson continues to read the demands of demonstrators — most of them seeking to defund the police and shift that money into social services — as well as several of their full names and which streets they live on.

RFT counted at least ten instances wherein Krewson read aloud an activist's full name and the name of the street on which they reside. At one point in time she lists a person's full name and full street address, remarking, "He lives around the corner from me."

After reading the budgetary demands of more than twenty people, including identifying information about most of them, she made these remarks:

"I agree with all these things, by the way — except we're not going to take all the money from the police," she says. "I think we need our police department."

The backlash on social media to what many perceived as the doxing of activists was swift. (The video in the first post below has been edited to remove identifying information.)

St. Louis Mayor Lyda Krewson doxxed protesters today live on air with full names and addresses. Apparently a group of protesters left their info with names/addresses regarding the city budget and it was used against them.

We all know Lyda ran on more and bigger police. But even with that I am surprised she’d be so outright reckless as to doxx folx on a live stream. #WTFLyda

Lyda's gonna argue that those letters and petitions are public records and anyone could get them with a sunshine request, and she's right.

Doesn't make reading the addresses on a broadcast any less shitty.

To be fair, letters delivered to government officials are typically considered public records, available to anyone. But it often takes a public records request to obtain them, and hearing the mayor broadcast names and addresses to the masses obviously caught more than a few viewers off guard.

The video was live on Facebook for about three hours before it was finally pulled. Local drag queen Maxi Glamour has since started a petition calling for Krewson's resignation. It has gotten almost 500 signatures as of press time.

We've reached out to the mayor's office for comment on the situation. We will update this post if and when we hear back.