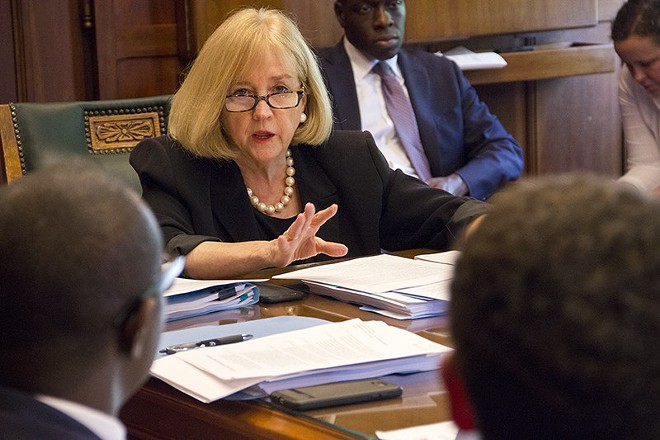 During an afternoon briefing on Facebook Live, fielded a question about an earlier meeting with demonstrators outside of City Hall. In response, Krewson picked up a stack of letters they had given her and read them, making sure to include their names and their streets. In one case, she read a person's name and full address. Among those named was minor.

The backlash has been fast and furious, spreading rapidly across social media. There were soon people standing outside Krewson's home in the Central West End. She came out to speak with them, but in an awkward (and filmed) conversation she declined multiple requests to apologize.


"I don't really think it was a mistake, but it was not intended to be hurtful to anyone," she told the group.

Krewson pointed out that the letters are public record, but people at the house argued that broadcasting the names and addresses of people critical of police, she put those people at risk of being targeted at their homes.

"Just kind of like how you guys are here," Krewson responded.

Told that she had broadcast information of a minor, the mayor said the minor must have signed the form.

After not apologizing during the in-person conversation, the mayor apparently had a change of heart later in the night. She issued the following statement to the Riverfront Times at 9:17 p.m.:

In an effort to be transparent and accessible to the public during the Covid-19 pandemic, for more than three months now I have been doing tri-weekly community updates on Facebook. Tonight, I would like to apologize for identifying individuals who presented letters to me at City Hall as I was answering a routine question during one of my updates earlier today. While this is public information, I did not intend to cause distress or harm to anyone. The post has been removed.

I’d like to apologize for identifying individuals who presented letters to me at City Hall today. This was during one of my Facebook updates as I was answering routine questions. Never did I intend to harm anyone or cause distress. The update is removed and again, I apologize.