Should Louis IX Statue Come Down Next? 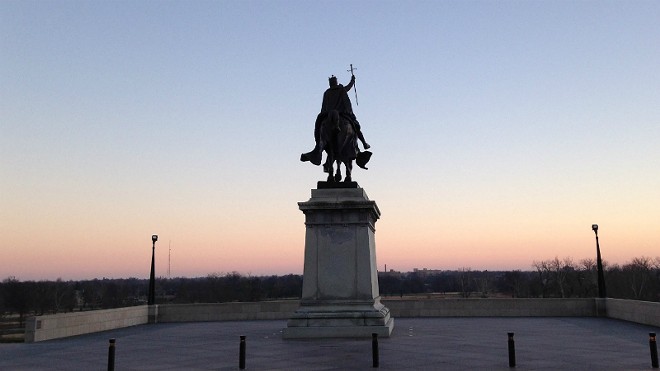 St. Louis just safely removed Christopher Columbus from Tower Grove Park. It could be worse: A statue of Christopher Columbus lost its head in Boston. In Bristol, England, a monument to slaver Edward Colston went for a swim. Philadelphia’s long-controversial statue of former mayor and police commissioner Frank Rizzo survived a felling attempt but is now in storage, festooned with graffiti. In Richmond, Jefferson Davis is gone and Robert E. Lee may soon follow.

The struggle against racist policing has inspired a fresh wave of hard looks at divisive monuments. But in St. Louis, we removed the Confederate Monument from Forest Park back in 2017. It’s now in storage at the Missouri Civil War Museum, under an order to never again be displayed in the city or county.

Since George Floyd’s death, activists had renewed calls to remove the statue of Christopher Columbus from Tower Grove Park. Designed by Ferdinand von Miller and sponsored by park founder Henry Shaw, the 1886 bronze was at the center of recent debates that led the park’s Board of Commissioners to pledge the addition of interpretive signage and markers of the area’s indigenous past.

Columbus, however, still reminds many people of the violent, racialized origins of the European colonization of North, Central and South America. Although his visage aided the quest of Italian-Americans to assimilate, it also inscribes a legacy of imperialist conquest and racist genocide. A disclaiming plaque or counter-monument will not erase that inscription. The Commissioners of Tower Grove Park rejected removal last year but now have reversed course very swiftly.

So we're good, right? We're in the clear?

Maybe not. Arguably the worst offender of local statues remains atop Art Hill in Forest Park. Readers need no introduction, and perhaps feel their hearts swell on sight. But sadly, the statue of King Louis IX — St. Louis himself, our city’s namesake — enshrines a legacy as violent and offensive as that of Columbus.

The statue itself is a dead giveaway. Beloved Louis, outfitted with chain mail and helmet, hoists his sword high and forward. The king is likely plunging his sword toward Muslims in the Middle East or Northern Africa, because erasing non-Christian life from the Holy Land was the foremost concern of his reign. He launched his first Crusade in Egypt in 1249. He died in Tunis in 1270 while leading another.

Back in France, before the Crusades, Louis IX had tested his resolve by persecuting Jewish people. In 1243, he banned the Talmud and other Jewish texts, which his soldiers then confiscated and burned.

If that sounds despicable, it did not end poorly for Louis IX. In St. Louis, his name is repeated thousands of time each day. Before the Gateway Arch rose, the icon of Art Hill — cast by W.R. Hodges from a model by Charles Niehaus in 1906 — illustrated letterheads, magazines, menus, maps, signage and even clothing. Things could be worse for a man who devoted his life to killing Muslims and persecuting Jews.

Will this statue survive the current moment? Should it? As an historian, I hesitate to make such pronouncements. But right now, the masses devoted to justice are not waiting for expert opinion, deliberative commissions or other processional gestures at justice. People may take matters into their own hands, or they may not. While felling offensive statues is a regular part of political change, in the United States it happens incrementally and unevenly. Columbus may be the only casualty of this moment, and Louis IX may hoist sword high for a battle ahead.

However, as we continue to debate issues of justice and representation, statues are not innocent bystanders. Political commemoration is a symbolic statement of the social compact. It records the lives and names of those the state wishes the populace to acknowledge, if not revere.

But sometimes the people have had enough. No symbol, commission or scholarly compensation will suffice. Only the state’s redress of their main grievance will do.

Michael R. Allen is Senior Lecturer in Architecture, Landscape Architecture and Urban Design at Washington University in St. Louis and Director of the Preservation Research Office.