Hours after Florissant's police chief announced he had fired a detective caught on video running down man with a police SUV, protesters packed the road in front of the station to call for criminal charges in the case.

An energized but nonviolent crowd of several hundred people had closed off North Lindbergh Boulevard, the normally busy artery in front of the Florissant Police Department headquarters, by early Wednesday evening.

This was the third night of protests at the station following the release of the video of the incident. In the footage, the Florissant detective is seen ramming an unmarked patrol car into a fleeing suspect and beating the twenty-year-old as he lay on the ground.

Earlier in the day, protesters got a boost when they learned the detective, Joshua L. Smith, had been fired in connection with the incident, while two other city police detectives were suspended. The incident occurred late on the night of June 1, but video of it did not surface until five days later. The video was captured by a Ring door camera on the porch of a house in the 9800 block of Eastdell Avenue, in Dellwood.

About 7:45 p.m., protesters marched from the police station and gathered in front of the home of Florissant Mayor Tim Lowery, who served as the city's police chief before he was elected to office.

The crowd left the house house after about 30 minutes, splitting up. One group returned to the police station while another marched onto South Lindbergh, taking over the street. Protests continued until about 9:30 p.m. when most of the crowd began heading home.

Editor's note: This story was updated multiple times with additional details.
Correction: Due to an error during the editing process, the mayor's name was incorrect in an earlier version of this story. 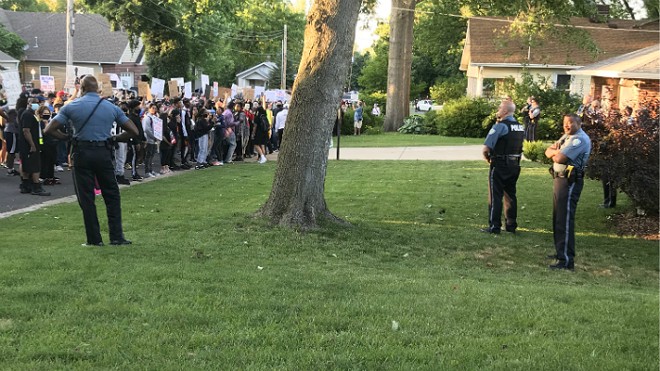