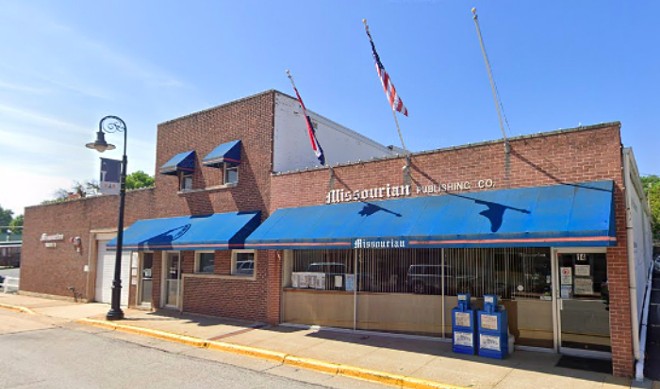 Two sisters who are co-owners of The Missourian have resigned after their father Bill Miller Sr., the editor and publisher of the newspaper, published a racist cartoon in Wednesday's edition.

Susan Miller Warden and Jeanne Miller Wood issued a statement today announcing they were leaving the family paper in protest of their father's hurtful actions. They say their dad slipped the inflammatory cartoon into the paper without their knowledge, and they do not have the editorial control to ensure he won't do something similar again.


We're not reprinting the cartoon here, but it depicts a stereotype of a dark-skinned robber yanking on the purse of a blond-haired white woman. As she calls for help, the thief tells her, "Good luck with that, lady ... We defunded the police."

The daughters say they saw the cartoon at the same time as readers.

"Even more painful for us is the fact that this hits close to home because this is our father," they write. "Many families have been having these painful discussions in the privacy of their homes. We unfortunately have to have this debate in a more public way."

Bill Miller Sr. has now published an article entitled "I Apologize" on The Missourian's website. He says publishing the cartoon was "racially insensitive" and reflects "poor judgment on my part."

That's not what he said earlier in the day when a person confronted him at the newspapers offices.

"I'm not sorry," Bill Miller Sr. is heard saying in a video posted on Facebook.

When he did get around to apologizing, he whisked through his contrition and  spent a large portion of his message on denouncing a growing movement to defund police departments.

"The cartoon was intended to support our editorial position that defunding police departments in the aftermath of George Floyd's senseless killing is not the answer to resolving the racial inequalities and injustices that have occurred in policing in this country," he writes.

We've reached out to the sisters and their father for comment, and we will update this story if we hear back.

The Missourian is located in Franklin County, about an hour's drive west of St. Louis and has been owned and operated by the Miller family since 1937.

Susan and Jeanne are the third generation of the family to own and manage the paper. The company publishes three newspapers: The Washington Missourian, Union Missourian, and the St. Clair Missourian. It also publishes a senior citizens magazine, Senior LifeTimes and manages a commercial printing operation called the Missourian Publishing Company.

Bill Miller Sr. is the father of former St. Louis County Executive Steve Stenger's chief of staff Bill Miller Jr., who went to federal prison for his role in a pay-to-play scheme that toppled the county's crooked leadership. The younger Miller had been on the company's board, but the latest state filings show he's longer a board member.

Erin Burger, a member of a group of activists protesting for social justice reform in the county of Franklin, reached out to the Riverfront Times after seeing the cartoon.

"This publication has covered several protests that we've done, one in Union, another in St. Claire, and I think a lot of people thought it was a slap in the face for them on one hand to feel like they were supportive of what we were doing, and on the other hand to publish an editorial cartoon that is not just irresponsible in the social climate we're in, but also dangerous to people of color who are greatly outnumbered in these areas," she says.


The group now plans to protest the paper at 9 a.m. on Monday.

"These outnumbered people do not need the flames of hatred to continue to be stoked," she says.

Editor's note: This story has been updated with additional information.