There Were All Kinds of Protests in St. Louis Monday After Packed Weekend

by Doyle Murphy and Mike Fitzgerald 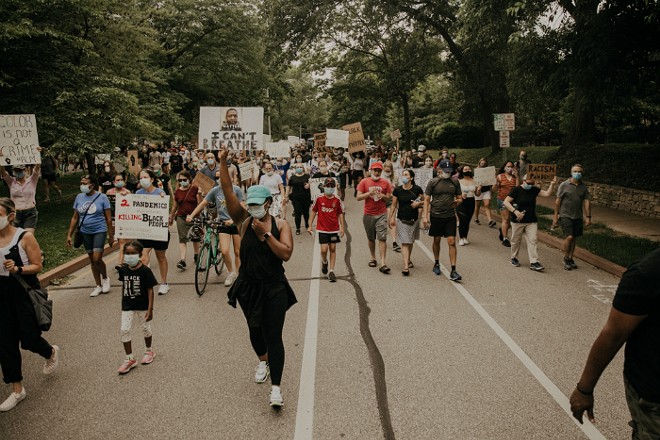 After a thousands-strong march over the weekend, George Floyd protests have continued to pop up in new actions across greater St. Louis.

In downtown, public defenders and like-minded attorneys marched from the Missouri Eastern District Court of Appeals to the Thomas F. Eagleton Courthouse and then on to the Old Courthouse, hoping to draw attention to police abuse against black people "on the streets and in the courtrooms" they say leads to high incarceration rates.

The public defenders were followed shortly after by the 100 Black Men of St. Louis organization, which led a procession of men in business suits from the Old Courthouse to City Hall as part of a "March for Equality and an End to Systematic Oppression."

In Clayton, young Clayton High School alums organized a march in support of Black Lives Matter, winding through neighborhoods to Wydown and Skinker boulevards where they knelt for eight minutes.

In Florissant, protesters gathered outside the town's police station, demanding charges against a detective who was recorded ramming a fleeing suspect and then beating the man on the front lawn of a house in Dellwood.

Monday's marches played out across the metro on the same day that now-former Minneapolis police Officer Derek Chauvin made a court appearance, by video, to face charges in the killing of Floyd. A judge agreed to increase the 44-year-old's bail to $1.25 million on charges of second-degree murder and manslaughter.

Chauvin was recorded kneeling on Floyd's neck during an arrest for suspicion of forgery — using a fake $20 bill to buy cigarettes. The grisly video of Chauvin, backed up by three other cops, squeezing the life out of Floyd kicked off protests across the country, extending internationally.

Beyond even Floyd's killing, protesters have pointed to a long and ongoing history of outrages. In Florissant, protesters say that includes the actions of the Florissant police detective. 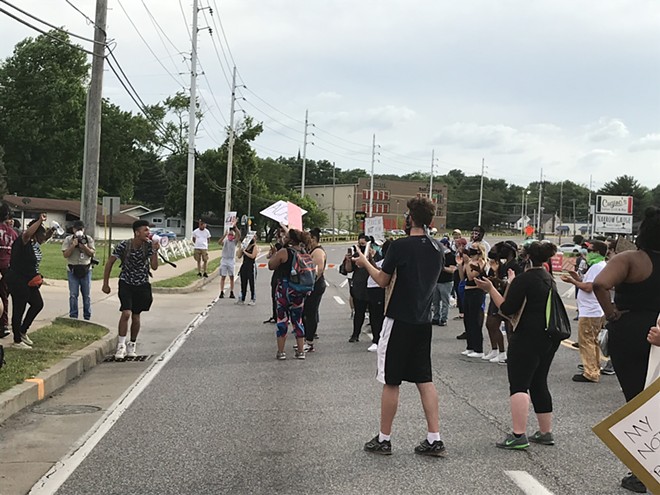 Protest participant Aireyon Clem, 26, of St. Louis acknowledged that she did not know if the showing up for Monday night's action in front of the Florissant police headquarters — which was empty and sealed up, its glass doors and windows replaced by plywood — would make a long-term difference. But it's worth the effort to try, she says.

"We've been oppressed for too many years," she says. "We're making people uncomfortable. And that's what this is about."

Clarissa Thomas, 27, of Florissant, says she drew encouragement from the fact that so many of the people showing up for protests across the St. Louis area against racism and police brutality are "from different backgrounds that are involved with making change."

Like others who showed up Monday night, Thomas vowed to attend protests in front of the police headquarters until the suspended police detective is fired, arrested and charged with a crime.

"This is where I live," Thomas says. "This is my community. And something needs to be done about it."