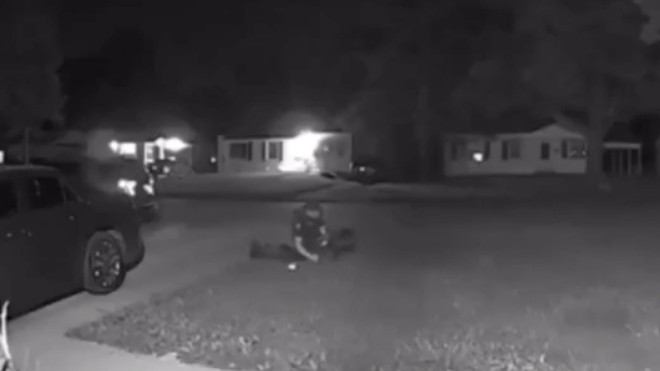 A group of clergy and civil leaders is calling for the immediate firing of a Florissant Police detective after video surfaced two days ago purportedly showing the cop using an unmarked vehicle to run down an unarmed man on a Dellwood street.

The detective was also shown beating the man with his fists as he lay injured on the ground, according to the widely broadcast video, which was made by a porch security camera in the 9800 block of Eastdell Drive, in Dellwood.

Darryl Gray, the coalition's political advisor, also took Florissant Police Chief Tim Fagan to task for the fact the incident occurrent June 2, but Fagan did not learn about it until four days later, a situation Gray labeled "problematic" in a press release.

"Why wasn't this reported to him immediately?" Gray asked in the release. "It speaks to the lack of police transparency and accountability that is being protested against throughout our country."

After the video surfaced Real Stl News and then St. Louis TV stations Saturday, Fagan announced that he had suspended the unnamed 31-year-old police detective, a nine-year veteran of the Florissant police force.

Fagan could not be immediately reached for comment Monday.

Local news media is reporting the twenty-year-old man hit by the police vehicle was treated for a broken ankle at a local hospital and released.

Residents of the 9800 block of Eastdell Avenue who were interviewed late Monday afternoon told the Riverfront Times they were asleep at just after midnight on June 2, when the Florissant Police detective ran his patrol car into a fleeing suspect.

Several residents interviewed said they were awakened by the sound of a police helicopter in the minutes after the incident.

“It was about over when I looked out,” said Beverly McMullen, who lives two doors east of the house whose porch security camera captured video of the cop running into the man, and then pummeling him on the front lawn of a house.

McMullen described her neighborhood of modest two-bedroom homes with carports as "pretty quiet.”

She added, “I have never had a problem with the police.”

Another woman, who lives a few doors down from where the incident occurred, said she too was awakened by the sound of a police helicopter.

The woman, who asked not to be named, said she’s never experienced problems with the Florissant Police.

“I think they were just doing their job,” she said.

Wesley Bell, the St. Louis County prosecuting attorney, has already announced that a special prosecutor has been appointed to look into the case because a close relative of one of Bell's staff members was on the scene when the incident happened on the night of June 2.

Meanwhile, the U.S. Department of Justice, the Federal Bureau of Investigation and Jeff Jensen — the U.S. Attorney for the Eastern District of Missouri — "are aware of the situation," according to a statement issued by Jensen's office.

"Experienced prosecutors and agents have been assigned to review the matter for potential civil rights violations," according to Jensen's statement.