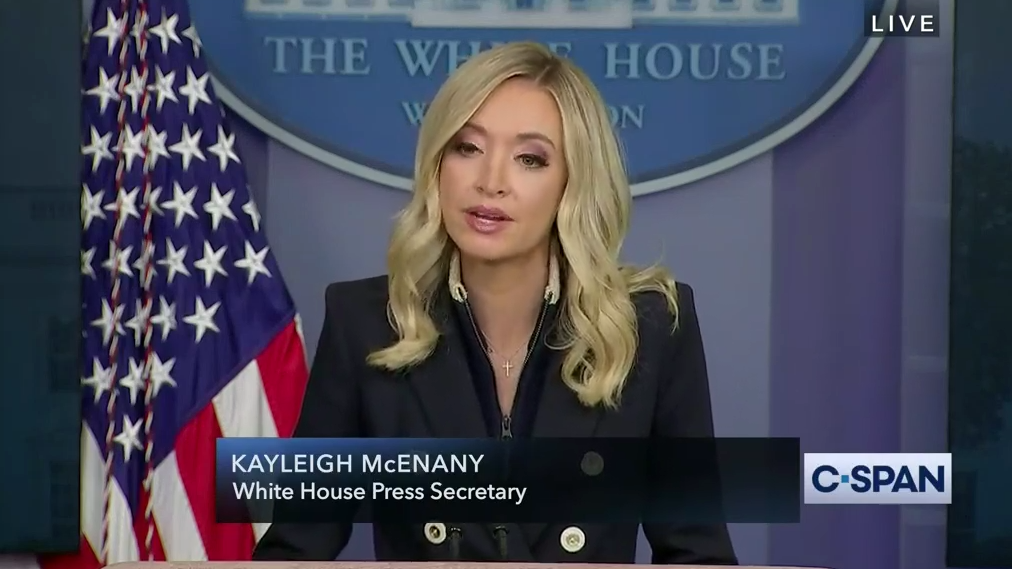 White House Press Secretary Kayleigh McEnany went on live television today and proved she doesn't know the difference between St. Louis and Louisville while trying to make some stupid point about Twitter, because apparently that is the type of shit this adminstration chooses to care about in the midst of widespread societal unrest and a global pandemic.

During a press conference Monday afternoon, McEnany took a question from a reporter, who asked if Trump regrets using phrases such as "when the looting starts, the shooting starts" (nope) and "vicious dogs" (nah) and whether he was considering apologizing (hahahaha c'mon, no chance).

McEnany responded by saying that the looting/shooting phrase, which is a callback to the words of virulent racists and segregationists from the '60s, "was taken out of context" by the social media company, who flagged the post for "glorifying violence."

She then echoed the president's own BS backpedal from days earlier, in which Trump tried to claim the tweet was a statement of fact referencing the shooting of one person in Minneapolis and of seven people in Louisville who were looting during Thursday evening's demonstrations over the death of George Floyd, rather than a threat to direct the National Guard to shoot American citizens.

Except she didn't mention Louisville at all. She apparently thinks this happened in St. Louis. She's even checking her notes while she says it.


"There were seven people shot in a St. Louis riot a few nights ago, and the president clearly laid out what he meant," she says. "But it is interesting to watch the gut instinct of Twitter to go ahead and label what the president said as somehow inciting violence, which it absolutely was not."

That's right, adding to the overall absurdity of this stupid exchange is the fact that there had been no reports of looting in Louisville on Thursday night, rendering Trump's point about the city (and by extension, McEnany's misstated point about our city) complete nonsense, as pointed out by Louisville's Courier Journal newspaper on Friday.

"We did not see looting last night," Louisville Metro Police spokeswoman Jessie Halladay told the paper on Friday. "I don’t know if any reports may have been filed today by businesses reporting any thefts, but in the way looting is generally considered, we did not see that last night."

It seems laughable to think that we'll see any kind of correction from the Trump administration about this matter, because they are shamelsss ghouls who seem to take glee in spreading misinformation, so we figured we'd go ahead and do a little fact-checking for them.

Claim: Trump's press secretary is too dumb to read the name of the right city off of a piece of paper right in front of her.
Fact: It would appear that way, yes.