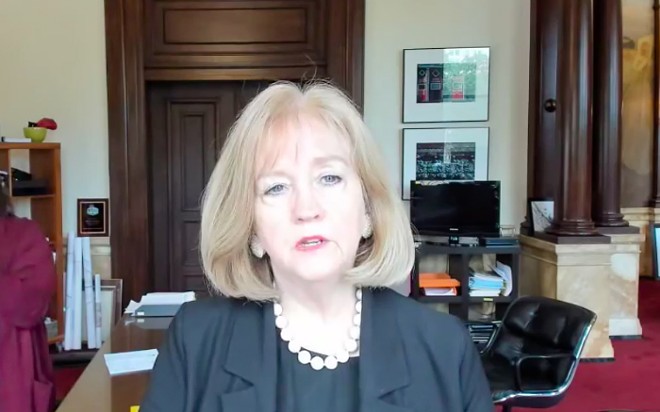 The city will hand out face masks to people protesting police abuse in hopes of curbing the spread of COVID-19, Mayor Lyda Krewson says.

Thousands of people have filled streets across the country in response to the killing of George Floyd by police in Minneapolis. That has a lot of public officials worried about a spike in coronavirus cases.

"We know that black and brown communities have been more devastated by COVID than white communities," Krewson said today during an address broadcast live on Facebook. "We don't want these protests to contribute even more to that tragedy."

The mayor, who previously blasted Memorial Day partiers who packed into Lake of the Ozarks bars, acknowledged that the reasons for the protests are serious and address issues that affect people's lives. She said the video of Floyd's death, in which Minneapolis police Officer Derek Chauvin kneels on the prone man's neck for nearly nine minutes, made her "gasp" when she watched it. "There's no defending it."

But the city is also still in the early days of reopening, gingerly lifting the strictest of rules that had forced businesses to close in mid March. Deaths in the city, now exceeding 130, have continued, as have new cases and hospitalizations.

"We're in the middle of a health pandemic," Krewson said, but she acknowledged the issues at the core of the protests. "And you know, frankly, violence is also also a health pandemic. We all know that."

So the city is suggesting a path of harm reduction, counseling protesters to wash hands, maintain whatever social distance is possible within crowds of hundreds and wear masks. The logistics of how the city will hand out masks and how many will be available is unclear. We've asked the mayor's spokesman for more details and will update this post if we hear back. (Update: Spokesman Jacob Long says he personally handed out masks today and left a pack where protesters had placed water and other supplies. He says he's not sure how many will ultimately be handed out, but the city will make sure to distribute them at demonstrations, because they're important to slowing the still-dangerous coronavirus.)

Asked if she would advise protesters to self-quarantine for two weeks, Krewson said it wouldn't be a bad idea. She also said the city wasn't planning to order a curfew, as other cities across the country, including Ferguson, have done in hopes of heading off destruction.

However, if violence becomes a problem with the demonstrations, the mayor said, a curfew could be an option.

There is some irony in the city promising to hand out masks and urging protesters to cover their faces. During the last major protests in St. Louis, following the 2017 acquittal of white ex-cop Jason Stockley in the fatal shooting of Anthony Lamar Smith, police targeted protesters who put on masks and goggles to protect themselves from riot cops' pepper spray and tear gas.

Questioned in federal court about the department's heavy-handed tactics, St. Louis police Lt. Timothy Sachs testified that the sight of protesters pulling on that kind of protective gear signaled to him they were "wanting some kind of confrontation."

Now, the city seems to have decided that the unmasked protesters are the dangerous ones.