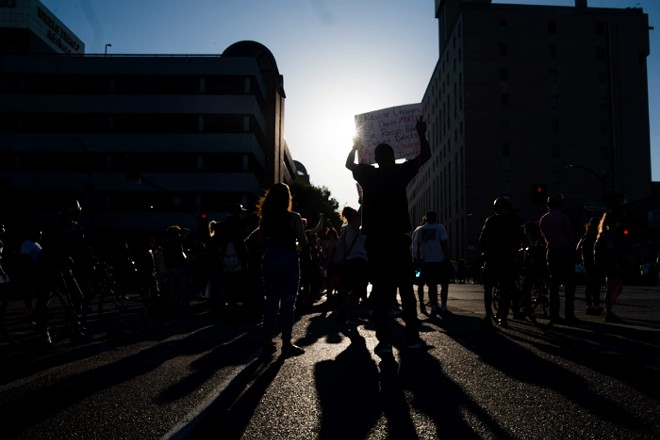 A protester was killed early Saturday morning when he was caught between trailers of a FedEx truck and dragged, police say.

The man, whom police haven't identified, was among a group of people on North Broadway near Cass Avenue shortly after 2 a.m., toward the end of an hours-long demonstration that was organized in response to the killing of George Floyd by police officers in Minneapolis.

St. Louis police say the 44-year-old driver of the FedEx truck was diverted early Saturday morning off of Interstate 44, which had been blocked by protesters. Once off the interstate, he stopped for another large group of protesters. According to police, several people busted into one of the truck's two trailers and started pulling out packages. At the same time, two men hopped onto the truck cab footboard and showed guns to the driver, police say.

The driver hit his airhorn and drove away, trapping a man between the trailers, police say. Graphic video posted to social media showed the man being caught by a tire and sucked under the wheel while people tried to free him.

Video from another angle showed people on the cab footboard (it's hard to tell from the grainy footage, but there's no clear sign of guns), banging on the side of the truck. One of the men who filmed the encounter says they were trying to tell the driver someone was trapped between the trailers.

Police stopped the truck shortly after on North Broadway. The mortally injured protester was transported to the hospital, where he was pronounced dead. The incident is still under investigation.

There have been protests in cities across the country since a video of Floyd's death in Minnesota hit the internet. The footage shows Minneapolis police Officer Derek Chauvin with his knee on the back of Floyd's neck for nearly nine minutes, including nearly three minutes after Floyd became non-responsive, according to court documents. Chauvin was one of four officers quickly fired as a result, and Chauvin was charged on Friday with third-degree murder and manslaughter.

On Friday in St. Louis, hundreds of protesters marched through the night, eventually shutting down I-44 for several hours. The St. Louis Post-Dispatch reported that protesters set a small fire on the interstate and people scattered at about 2:30 a.m. after hearing what sounded like gunfire.

No arrests were made throughout Friday or Saturday morning.

Editor's note: This story was update with a revised time of the incident provided by St. Louis police.