It Looks Like the XFL, and Our Beloved BattleHawks, May Return After All 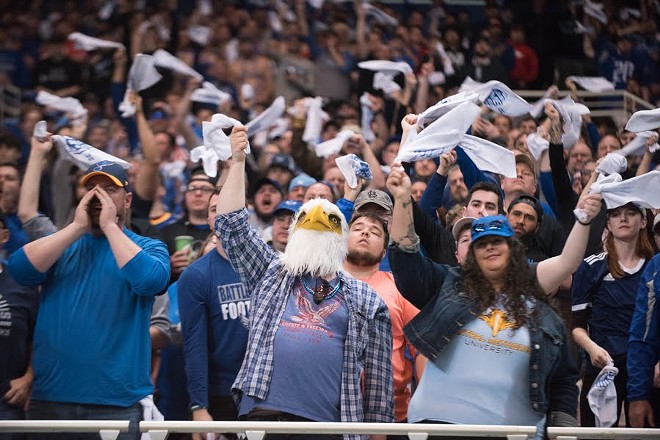 Just when you thought football in St. Louis was dead in the water, Vince McMahon strikes again.

The Athletic reports that sources from the XFL believe that McMahon has “covert” plans to buy back his own league from bankruptcy court. Adding to the intrigue, league president Jeffrey Pollack has reportedly reached out to stadiums in multiple markets — including St. Louis — to discuss the reinstatement of lease agreements.

Amid controversy and chaos, two things WWE promoter and executive McMahon know well, the XFL shut down on April 10 and filed for Chapter 11 bankruptcy three days later. The end of the league was a devastating blow for fans — especially in St. Louis, which had proven itself to have a voracious appetite for football since that toupee-wearing asshole Stan Kroenke took his ball (and with it, the Rams) and went home to LA.

But many have speculated this was simply a financial ploy by McMahon to make it through the COVID-19 pandemic without paying the costs of operating a league with no means to make a profit. The XFL at its time of closure had some 400 employees, including some highly paid players, executives and name-brand coaches including Bob Stoops of Dallas, who was signed on with a two-year, two million dollar contract.

Hope that the league may return first arose after news came out that just days before filing for bankruptcy, the league had been contacting new cities about relocating some of the teams that had been struggling to bring in fans. In St. Louis and Seattle this was a non-issue, and it's from these two teams we’ve received our latest glimmer.

XFL president Jeffrey Pollack has reached out to the host venues of the Dragons and BattleHawks to discuss reinstating lease agreements, the Athletic reports. Though the XFL declined to comment, a representative for Visit St. Louis who oversees the Dome at America's Center confirmed to the publication that Pollack reached out to them about the lease.

Honestly, it should come as no surprise.

Did you really think McMahon would bow out so quietly amid the surprising success of his pet project's relaunch? This was the plan from the start. Close the doors. Weather the storm. Relaunch when the time is right.

Was it a cutthroat maneuver to cut ties with hundreds of employees in the face of a global pandemic? Most definitely, but remember, this is the man who made himself into the wrestling business's biggest villain after screwing over Bret the Hitman Hart, one of the most loyal and hardworking professional wrestlers of all time, and then letting him walk to his rival company World Championship Wrestling — the very same company Vince and the WWE later ran out of business and purchased.