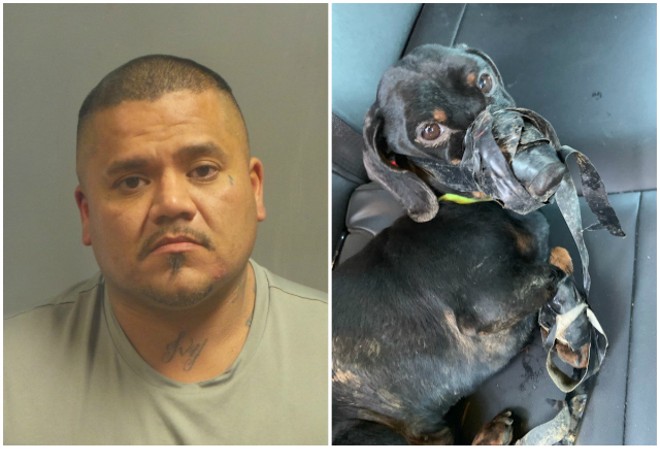 Paul "Paco" Garcia was sentenced today to ten years in federal prison on a gun charge — and he still faces charges in a horrific case of animal abuse.

The 41-year-old Barnhart man was arrested by Jefferson County Sheriff's deputies in February 2019 after a dachshund named Flick was found dumped in a ditch in Imperial. Flick's muzzle and legs were bound in duct tape, and investigators believe he laid in the freezing ditch for twelve hours.

Detectives were able to trace a fingerprint on the tape to Garcia, who told them he thought Flick had been sent to spy on him, authorities say. Garcia, a meth dealer, explained that he believed Flick was equipped with a law enforcement camera. So Garcia tied him up, put him in a bucket and drove him to a deserted area near a rock quarry, where he threw him out the window, authorities say.

A week after his arrest on state animal abuse charges, the U.S. Attorney's Office filed federal charges, accusing Garcia of illegally possessing a gun as a felon. He had been stopped in September 2018 by police in Jefferson County, who were investigating him for trafficking meth. According to federal court documents, police searched the car and found metal knuckles and, in the glove box, a Rock Island Armory .38-caliber revolver.

Garcia has multiple convictions for domestic abuse, along with convictions for trespassing and possession of chemicals used to make meth. So he's not legally allowed to have a gun.

He remains in custody in Crawford County Jail.