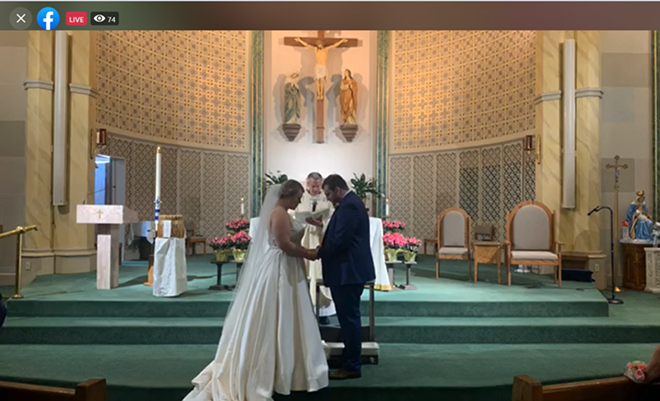 A piano version of Ed Sheeran’s “Perfect” starts to play. The church fills with music as the parents of the bride walk down the long aisle. Then, the flower girl and ring bearer are waddling down the aisle with the energy only small children can possess.

Next, the bride makes her entrance. Yet, there’s no one in the pews. No heads turn, no one stands as she and her father make their way down the aisle to a new future.

Instead, the live stream floods with comments.

Katie Hawkins and her new husband Zach were just one of the couples set to get married this spring when COVID-19 restricted gatherings of more than ten people, effectively canceling any celebrations that anyone had planned.
The couple had the same options others did: cancel the wedding or follow restrictions.

Though it wasn’t what they imagined, the two decided to continue with a wedding on May 2 and to celebrate at a later date this summer. The two created a Facebook event in order to invite friends and family to celebrate with them.

“Who would have known something that started out online five-ish years ago would end up back here for a wedding?” the Facebook invite read. “We don’t want to wait another second longer to become Mr. and Mrs. So, find your favorite place on the couch or wherever you may be, put on your lazy Saturday best and join us as we begin the start of our forever.”

There were 100-plus people on the live stream at times from all around the country and world.

“As much as we wanted our family and friends there in person, we also knew we could be in the same situation in July as well,” Katie Hawkins says. “Now, we’ll get to celebrate two days. How cool is that?”

The wedding had exactly ten people including the priest at Saint Francis Borgia in Washington, Missouri. During the 30-minute ceremony, the priest talked into a mic, allowing the live stream viewers to hear every second. Comments flowed in with words of encouragement and congratulations.

“Today, we prove that nothing can separate or keep us apart,” Father Mike Boehm said as he married the couple.

Outside, friends and family had a surprise waiting for the newlyweds. Guests had arranged themselves in the parking lot to follow social distancing rules. There were balloons, signs, music, bubbles and plenty of cheering in the parking lot.

As the wedding came to an end, the couple had a drive-by receiving line for the couple. People shouted their congratulations from their cars as the Hawkins waved them on.

“Zach and I joke around that the whole experience kind of felt a little royal wedding-esque,” Katie Hawkins says. “It was such a fairytale-like feeling, as cliche as that sounds.”