We Must End Marijuana Prohibition For Economic Recovery in a Post Pandemic World. America Can Be A Model For What Needs to Be Done 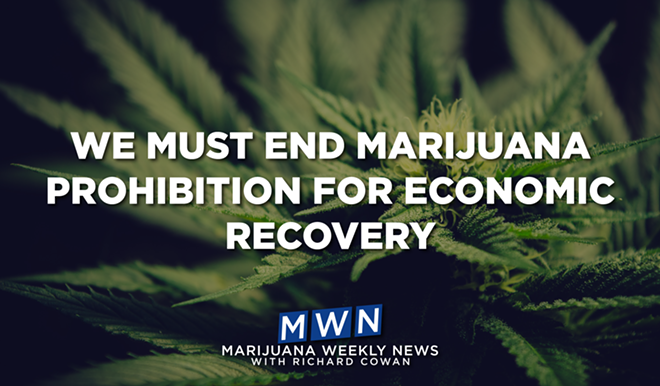 In the midst of the pandemic, there is much uncertainty about almost everything, but one thing does seem certain. America is going to be much poorer. Or, to put it in a global perspective, America and a few other countries will be much less rich and the rest of the world will be much poorer, and no wall or welfare program will protect us.

America, which we like to think of as the Light on the Hill, really is the global center of the entertainment industry, with Hollywood, Broadway, Las Vegas and the major streaming services. And Wall Street is still the financial center of the world, while Silicon Valley still leads the tech revolution.

And the good news is that the American people are ready to lead the world cannabis revolution. Let me rush to add that the word “revolution” has been so overused and overstated that it has lost its meaning even in our country born in a celebrated real Revolution, but once again this is the real thing.

Because… please note that I said “the American people” not “America” and certainly not the government or our so-called leaders. I remember seeing a bumper sticker on a taxi in Washington (appropriately) that said, “If the people will lead, the leaders will follow.” It probably should have added, “Kicking and Screaming.”

Click here to learn more about my product Blue Ribbon Hemp, specifically made for seniors.

And that has certainly been true of the struggle to end marijuana prohibition, which — until recently — was opposed by all of the establishment. In fact, the November Presidential election will be a contest between two prohibitionists, an old one, Joe Biden, a long time drug warrior, and a new one, Donald Trump, who was against the Drug War until he was for it.

Oddly, only the libertarian right and the socialist left have consistently opposed marijuana prohibition. Milton Freedman and Bernie Sanders are an odd couple indeed. (Biden will have to yield to the Left.)

Of course, one might imagine that marijuana prohibition is finally coming to an end in America, because eleven states have legalized marijuana for both medical and recreational use, but even in these states the taxes and regulations on marijuana are generally so excessive that the back market continues to thrive, and federal prohibition continues to limit even supposedly legal hemp cultivation.

The 0.3% limit on THC in “hemp” is arbitrary and capricious. It pointlessly increases both the cost and the risks for farmers. A three percent limit would still accomplish the same objectives, if someone wants an arbitrary distinction.

Shamefully, every year, there are still over 600,000 arrests for simple marijuana possession, more than for all violent crimes combined! In fact, some states, including Georgia, Indiana, Iowa, Kentucky, Texas, and Virginia, don’t even allow medical use of marijuana and only allow CBD use. These states also have one other thing in common, they all like to shout about “freedom” and wave the flag at every opportunity.

Meanwhile, the unemployment rate is soaring and many jobs and businesses are gone forever. The sheer scale of the problems are almost certain to lead to social unrest which will be visible to the world. But so will the solutions, because the world really does look to American popular culture for leadership.

Want to learn more about what CBD does and why how it affects your body? CBDSeniors.com has you covered.

For added context, according to the National Institute on Alcohol Abuse and Alcoholism, each year nationwide there are roughly 250,000 emergency department visits for alcohol addiction withdrawal which is so extreme that there are 850 deaths related to alcohol withdrawal. Ironically, that is why alcohol sales are considered “essential”, especially in the lockdown.

But Zero deaths directly attributable to marijuana use.

And alcohol kills thousands more in accidents and is a major factor in violence, especially domestic violence during the current lockdown. But we regulate cannabis as though it were more dangerous than alcohol.

Are you looking for high-quality CBD oil for seniors? Check out Blue Ribbon Hemp.

Meanwhile, in The Netherlands, population 17 million, marijuana has been available for over forty years in approximately 750 “coffeeshops” where anyone over 18 can buy and smoke cannabis. Amsterdam has approximately 170 “coffeeshops”, with a population of 900,000 (about the same as San Jose, California, in the heart of Silicon Valley, where they take pride in their libertarian outlook.)

In addition, you can smoke cannabis, but not tobacco, in any bar, restaurant or venue where the owners allow it. (Most don’t.)

The results: the Dutch annual per capita rate of cannabis use is less than half of the American rate 5.4% vs 13.7% and the hard drug use rate is even lower 0.3% vs 0.57. And the murder rate is less than one fifth the U.S rate.

Very simply, marijuana legalization is not some wild experiment that has never been done before. And now, of course, we are beginning to see the same experience in some places in the US.

Meanwhile, the restaurant scene is being decimated by the pandemic shutdown and they are going to need new sources of income, especially with social distancing reducing their capacity. Being able to sell cannabis would give them a badly needed source of income, and allowing on-premise consumption (with vaporizers that don’t produce “second hand smoke”) would increase food sales.

Related Articles: Don’t ever buy CBD that wasn’t independently lab verified. Trust but verify, especially when it comes to CBD.

Simple Economics: When politicians calculate tax revenues from cannabis sales, they typically just think of sales taxes, but that is like projecting alcohol tax revenues that only counted liquor store taxes. In fact, there would be far fewer restaurants without alcohol sales, and there will be far fewer in the future without cannabis.

The day the music died... of a viral infection.

Of course, the same is especially true of the music scene. From Louis Armstrong to The Beatles to Willie Nelson, there has long been a connection between music and marijuana. Musicians have really been hurt by the pandemic with all of their gigs canceled and the venues closed.

Big concerts have always had clouds of smoke, but in smaller venues the police could threaten smokers and the owners. The popular music world should proudly recognize cannabis as part of its culture. To do otherwise would be both cowardly and hypocritical. But there is still a lot more smoke than sex in the closet these days.

Finally, in a multiracial society like America, cannabis could bring its diverse cultures together for social peace. Next week I will explore how really ending marijuana prohibition could bring real peace and justice to the communities hardest hit by the Drug War.

So use your imagination. Imagine what America and the world would look like without marijuana prohibition.