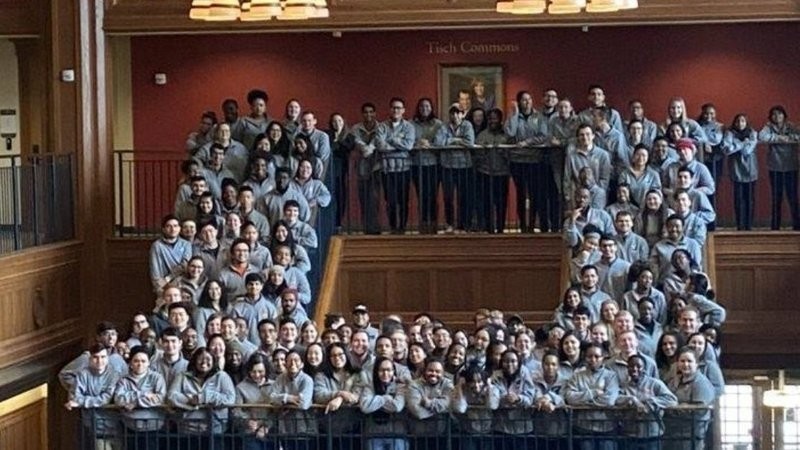 Joel Anderson and Jade Gardner loved their jobs. As residential advisors at Washington University, they were student employees, helping to manage operations and daily life in the university’s dormitories in exchange for housing and meals. The two say they spent nearly all their time taking care of their residents. Whether planning events or helping a student through a crisis, they were there for the people living in their halls.

Washington University was one of the first colleges in greater St. Louis to close its campus and move classes online. The closure included dormitories and cost residential advisors their jobs. The student employees received an email on March 11, informing them they were terminated immediately, they should stop contact with their residents and they were no longer eligible for any further compensation.

Residential advisors, or RAs, are paid through non-taxable living allowances, leaving them unable to apply for unemployment. In response to their sudden termination, Gardner and another RA started a petition requesting compensation. So far, it has reached nearly 1,600 signatures.

“[Being an RA] was one of the most rewarding parts of my semester, which is really good ’cause RAs at Wash U don't get a stipend or any benefits beyond housing and food,” Gardner says. “That connection and love with our residents is really what keeps us there. But it does sting a little bit to have been so suddenly cut off from the one benefit that we do get, which is housing and meals, and to not be getting any sort of compensation to help with that.”

In a written statement (scroll down to see it in full), the university says the RAs are not paid an hourly wage, so there are no paychecks to replace. However, the school says, it has tried to take care of the RAs by offering to allow them to continue living on campus for free and refunding payments for unused meal plans — or forgiving unpaid bills for meal plans. The RAs are also eligible to apply for help from the school's Crisis Response Fund that is open to the student body for essentials, such as medicine, food and housing.

“One of our highest priorities throughout this time has been and continues to be to support our highest financial need students as much as possible through this unprecedented situation,” the university says in the statement. “Our Residential Advisors are incredibly valuable members of our community and we have taken steps to ensure that, like all students, those with financial need have access to assistance.”

But the RAs say the steps the university has taken are insufficient or have been rolled out clumsily with information from the college arriving slowly, if at all. They've had a large Zoom call, but not smaller meetings, as the student employees requested, the RAs say. And RAs weren't allowed to just remain on campus, they say. They could apply and make a case that they needed stay due to "extenuating circumstances," according to the group.

"We are aware of multiple RAs who had their petitions denied (which led to homelessness for at least one RA)," the residential advisors group says in an email.

Anderson says there are a number of RAs who really need the financial benefits, such as free housing and reduced-cost meals, that come with the position. He and the group of RAs leading the fight for compensation conducted a survey in which the RA community was able to anonymously share their experiences.

Fifty RAs responded, and several recounted financial struggles such as high prices for flights home, family bills skyrocketing with an extra mouth to feed and having to buy new clothes after being forced to leave them behind.

Gardner has lost her therapy appointments, and Anderson says many of his belongings are still in his dorm room at the university, waiting to be shipped to his family home in Tacoma, Washington.

“For certainly a notable amount of RAs, it's been a pretty difficult last month,” Anderson says. “When it comes down to it, we're still expected to be students, which is understandable, but to make additional sacrifices like dealing with homelessness, food insecurity, mental health problems, emotional abuse at home from difficult family situations. I firmly believe that these are sacrifices that we shouldn't be asking students to make right now.”

The RAs have had little luck with their employers. Anderson says communication with the Office of Residential Life has been frustratingly limited. The office reached out to set up a group meeting but has not set a date or time. Anderson, a senior, is trying to make sure he leaves his colleagues in a better place than what they are currently in. “It would be really great and really comforting for me to know that people in the RA community who I hold very near and dear to my heart will be well taken care of next year or in years in the future if this situation is replicated,” he says.

The RAs are asking the school to compensate them with a one-time grant. Schools like Saint Louis University paid their RAs and student employees $750 in order to help with expenses. The RAs say the application for the university’s Crisis Response Fund was not made available until a week after the students had left campus. Few have actually been accepted or received the amount they needed, according to the group.

Another round of applications has begun and Anderson says the process this time is much quicker. They still don't know the acceptance rate. Gardner says she understands it’s a difficult job to go through these applications at a quick rate and doesn’t blame the administration for having difficulty with the crisis fund.

“I get why that would be a really hard thing to put a timeline on because, unfortunately, the losses that a lot of students have faced during this time are not very easy to quantify,” Gardner says. “It's very hard to read from this application, like, ‘Who are the students who are most in need, who are the students we can support?’ But, it just goes to show, I think we have to be honest about the fact that frankly, it's just not enough.”

Some of the RAs are hopeful the situation will lead to better communication with the Office of Residential Life, the department that oversees the residence halls.

“We want this to be a starting point in creating more discussion around better RA-Res Life relationships and better accountability and a better system through which RAs can actually voice concerns without any sort of fear of, like, institutional retaliation,” says one RA, who asked that her name not be published because she is concerned about backlash from the university for speaking out. “We just want to ask for better transparency, better communication and a better system. If this were to happen again, which it might, would they continue to kind of leave RAs out of the conversation and leave RAs in the dust? That’s the concern.”

She says this was her first year as an RA and she loved it. However, she fears that this will prevent future students from joining the staff.

“I know a lot of people have kind of an apprehension about working with Res Life as an administration, and I think there's just kind of, like, really kind of sealed that for a lot of people,” she says. “It's really disappointing to put all of our hearts into this job and to go above and beyond supporting our residents and doing what we can for our community, despite, in my opinion, not being paid well enough. It's just been really disappointing.”

Gardner says this situation has weighed on her mental health. She recounts having a heart-to-heart with her fellow RAs and how heartbroken they were.

“I truly just started crying hearing about the position that people were in and realizing that we just weren't getting enough assistance and we weren't getting enough help,” Gardner says. “Wash U is a school that really emphasizes us getting to know people by name and by story. It sounds cheesy, but it does mean that I've gotten to know a lot of my coworkers really well, and it makes me really sad to see them in this vulnerable place. It makes me really sad that we are currently not being offered the support that we need.”

One of our highest priorities throughout this time has been and continues to be to support our highest financial need students as much as possible through this unprecedented situation. Our Residential Advisors are incredibly valuable members of our community and we have taken steps to ensure that, like all students, those with financial need have access to assistance. Since RAs are compensated with free housing and free or reduced-cost dining, they are not paid an hourly wage or salary; therefore, they do not receive a paycheck that could be replaced. We have allowed RAs who wish to stay in the residence halls during the remainder of the spring semester to do so at no cost, even though they are no longer working as RAs, and we have given dining refunds to those who had unused meal points or forgiven balances due for those who owed for meal plan overages. We also have provided grants to RAs who held other part-time hourly jobs on campus, to make up for lost earnings from those sources. In addition, RAs, like all students, are eligible to apply for financial assistance through the WashU Student Crisis Response fund, which the university established to help students pay for housing, food, medicine and other essential needs during this time. We all are disappointed that the spring semester is ending this way, and we are grateful for the leadership and role that our RAs fulfilled this year. We will continue to provide support to all of our students during this difficult time.

Editor's note: Due to an editor's error, the original version of this story incorrectly reported that Washington University's residential advisors are paid an hourly wage. They are not. We regret the error.