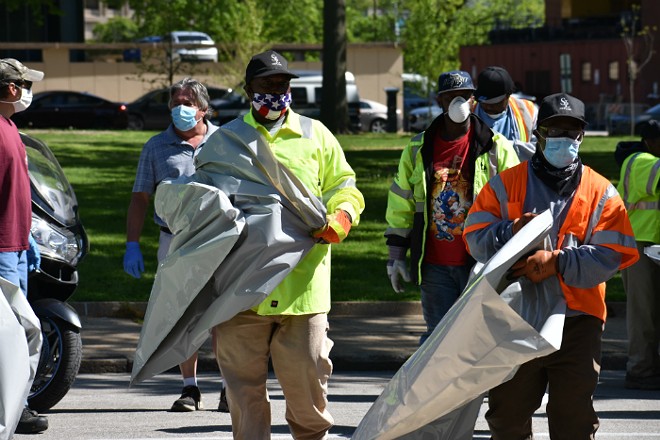 Editor's note: This story has been updated with a statement from ArchCity Defenders.

A federal judge has cleared the way for the city to evict about 50 people living in a pair of camps in downtown St. Louis parks.

In an order issued this morning, U.S. District Judge Sarah Pitlyk rejected a request for a temporary restraining order that would have stopped the city from dismantling the tent cities in the midst of the COVID-19 pandemic and enforcing a 10 p.m. curfew in the parks.

"There can be little doubt that the public interest heavily favors the City’s ability to take steps to prevent the spread of this deadly disease," Pitlyk writes.

The public-interest law firm ArchCity Defenders had filed a suit against the city early Friday, seeking class-action status for people living in the camps. It also requested the temporary restraining order, because the city had given residents until 10 a.m. that morning to move out.

During a two-hour hearing on Friday afternoon, ArchCity attorneys Lee Camp and John Bonacorsi argued that the city's claims it had plenty of shelter beds for those who would be forced out of the camps simply wasn't true. There had been a waiting list of more than 90 people as of Thursday, and the addition of about 230 beds through new contracts the city had signed with outside properties really only replaced the number of beds lost at existing shelters that were allowing fewer people so they could keep everyone safely spread out.

The named plaintiff, 39-year-old Ranata Frank, had asked for shelter space three weeks ago and had yet to be placed, according to the complaint.

But Pitlyk believed city attorneys Michael Garvin and Robert Dierker as well as Dr. Fredrick Echols, the city's public health director, who insisted that anyone who wished would be put in taxis and driven to hotels. The city admitted Frank had asked for housing, but they said it was her own fault she was still living in the park, because city workers couldn't find her when they went to follow up.

As part of her ruling, the judge scheduled a preliminary injunction hearing in the lawsuit for 10 a.m. on May 12.

Friday was a day full of confusion and unanswered questions. As the attorneys scrambled to file the paperwork and prepare for a hearing, the parks filled with people in anticipation of the 10 a.m. deadline to evacuate the encampments.

The camps are divided into two sections on the north side of Market Street, east of Tucker Boulevard. The eastern camp, across from City Hall, is known as the "Family Camp," and the western section is where most of the single people stay.

As 10 a.m. hit, camp residents and activists chanted, "We don't want to go!" while police and city officials gathered along the edges. Police Chief John Hayden and his top commanders were on the scene along with the mayor's chief of staff, Steve Conway, and the city Director of Operations Todd Waelterman, who led a team of city workmen in safety vests. Orange garbage trucks sat at the ready.

Marcus Hunt, who has become a spokesman for the camps, told Hayden that people living in the parks didn't trust the city, because they had seen little help in the past.

At 10:31 a.m., Waelterman and workers carrying trash bags marched into the western camp. The crowd of camp residents and activists hurried to block them, hopping on top of rolled up tarps and tents to keep them from being seized.

Waelterman clashed briefly with people, grabbing a flag that someone pointed in his direction before a man in the crowd yanked a surgical mask off Waelterman's face.

"Police!" cried Waelterman, raising his hand as if calling a waiter. "We've got an asshole here!"

Police didn't seem too eager to intercede but stepped forward as Waelterman and the workers retreated back to the road. Fifteen minutes later, Hayden and police supervisors in white shirts loaded up in SUVs and drove away, stopping for a bit in front of the eastern camp before heading off. Park rangers and a couple of bike cops remained nearby, but the majority of the officers moved about two blocks away where they were mostly out of sight by the library.

People in the camps celebrated as Hayden and the others left, waving and cheering while the garbage trucks rolled away. But this morning's ruling most likely means city crews will be back.

In a statement, ArchCity Defenders noted that the city's attorneys made a number of promises, including that all the people in the camps will be able to move into hotels and everyone can get tested for COVID-19.

"Now, as a result of this emergency litigation, people like Ms. Frank and other residents of the encampments standing up and resisting, committed outreach workers and volunteers on the ground, and everyday people demanding that the City treat unhoused people with dignity and compassion, there is a community that will be holding the City accountable for the promises that they have made," ArchCity said in its statement.

Despite repeated questioning by the ArchCity Defenders and the judge, the city and Echols were reluctant to say what would happen to anyone who refused to leave the camps. They insisted that the intent was to alleviate a danger to public health and provide a clean and safe place for the camp residents to stay, not to make them criminals.

Pressed by Pitlyk, Echols admitted he wasn't sure what would happen to anyone who didn't take the city up on its offer.

"We don't know at this time," Echols said.