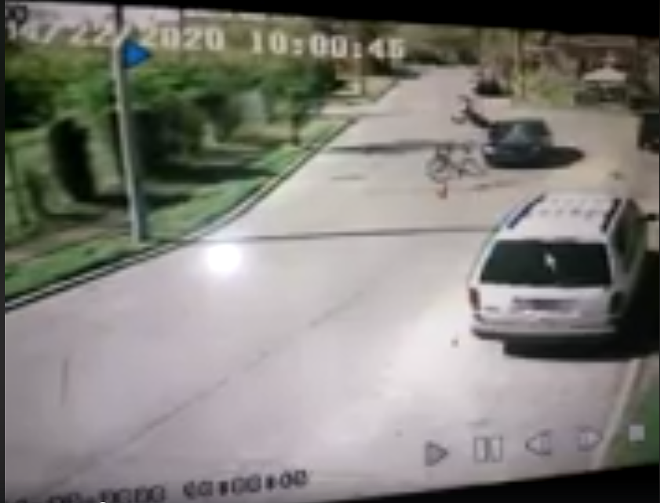 UPDATE: Police have shared some more information about this case, including that the suspect is believed to be a white male and that the victim "complained of minor injuries" before being transported by EMS. They also changed the description of the vehicle from "black" to "dark colored."

A shocking video shared this afternoon on social media shows the moment a driver in St. Louis plowed through a bicyclist — and then just kept on driving.

The video, which has since gone viral, was shared on Facebook by a man named Doug Worsham, and appears to be home security camera footage. In it, a bicyclist can be seen riding down the street, when a dark-colored sedan suddenly turns a corner and creams him head-on, sending the bike and its rider flying through the air and shattering the windshield of the vehicle.

But rather than even stop to see if the man was OK, the driver of the car punched the gas immediately after the devastating hit, driving out of view of the camera while the man and his bike lay motionless in the street.

According to the caption on the video shared by Worsham, the accident occurred at the corner of Ulena Avenue and Eichelberger Street in south St. Louis.

Police confirm that they received a call about the hit-and-run this morning, responding to the scene just after 10 a.m. They say the victim was conscious when they arrived, and EMS was called to the scene. They describe the vehicle as only a "black sedan."

The sleuths in the comments of the video, though, believe they have narrowed it down further than that, with the general consensus being that the vehicle is a black or dark blue Chevy Malibu manufactured between the years of 2008 and 2012. According to a post by Worsham, the vehicle has black tinted windows and a newly broken windshield.

Police say the investigation is ongoing. If you have any information that could be helpful, reach out to them at 1-866-371-8477.