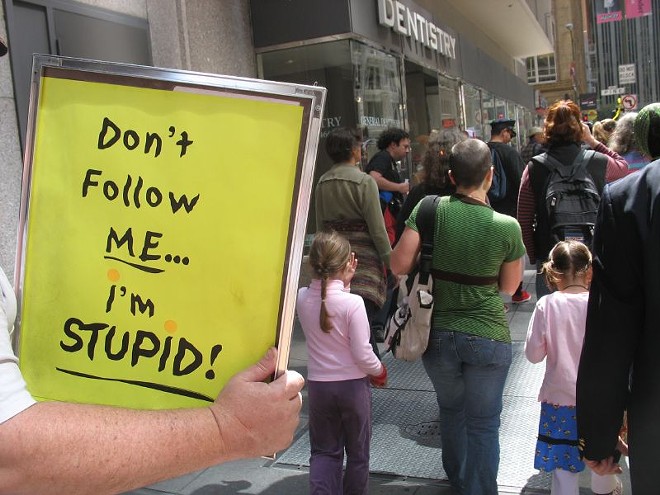 This past week, groups of protesters have begun cropping up all over the country in order to defend their constitutional right to [checks notes] get sick and possibly die from COVID-19, and probably infect their friends and loved ones and strangers, and maybe even kill some of them, too.

The specifics as to why, exactly, anyone on Earth would feel that is a worthy cause range greatly — mostly because of "MUH FREEDOM" and "tHe MeDiA" and also the "DEMON-RATS" and their "tRuMp DeRaNgEmEnT sYnDrOmE" and a whole bunch of other goofy shit that has nothing whatsoever to do with science or the health and well-being of the American populace.

Well good news: Now, Missouri is getting its very own please-let-me-die protest!

Scheduled for Tuesday at the state capitol in Jefferson City, the Rally Against The Lockdown/March For Freedom is scheduled from noon to 1 p.m. Sounds like a great time! Weather forecasts are suggesting temperatures might reach 70 degrees. What wonderful, temperate weather that will be in which to willfully expose yourself to a global pandemic!

Now before we go any further, let me say: I almost didn't write this post. To a degree, I understand that a lot of these people are scared, and this willful denial of science and defiant chest-beating amount to a coping mechanism. It is far, far more comforting to believe that uh George Soros and uh I dunno "the media" is teamed up with pfffft maybe Hillary or Obama or some shit I dunno in a dastardly plot to utterly sink the economy that is responsible for all of their wealth than it is to believe that an invisible pathogen that doesn't give a fuck about you or your political leanings is legitimately and indiscriminately infecting and killing people at an alarming rate.

At the same time, you are endangering the rest of us. Not to mention:

If you want an example of how housebroken Americans are, right now there’s mass protests in several states. They aren’t demanding rent freezes, or UBI, or healthcare. They’re demanding the right to go out and die to keep making the ruling class richer.


So please beg pardon while I drag these people mercilessly.

Accompanying the event's Facebook page is a Facebook group of more than 7,000 members dubbed "Reopen Missouri." The group's cover image is one of Mel Gibson from Braveheart, a movie which ends (spoiler alert) with the main protagonist dying while experiencing tortuous, agonizing pain. So far, so apt.

Here is the group's description:

Here's how we can provide greater protection to those who are most vulnerable to COVID-19:

1. Ask everyone over 70 and anyone with serious underlying health conditions to hunker down more than they have been.

2. Ask the rest of the population to get back to work.

3. Mobilize those who have already tested positive and recovered to cater to the needs of those who are most vulnerable.

Now is the time to reopen Missouri!

1. Into the cellar with you, grandma! We're gonna head out into the world and spread this shit like wildfire; you go ahead and live in absolute isolation — hunkering down even "more than [you] have been," in the words of the same exact people who believe the level at which we've all been hunkering down is akin to tyranny and torture — while the rest of us cough all over everything and overwhelm the hospitals so that when you fall down and break your hip in your house there are no ambulances left to come help you. It's for your own good!

2. Back to work, everybody! Never mind the fact that demand for most goods and services will be absolutely decimated whether these businesses are open or not on account of the many, many people staying home and sheltering in place under the advice of scientists and medical professionals. And never mind the fact that if you absolutely must work, you can likely get a job at a grocery store or hospital sanitation team right now, since those industries are booming. Not scared? To the front with you, then!

3. Ah yes, because there's been no problems so far with getting tested, right (HAHAHAHAHA)? Also, P.S., you can help those who are most vulnerable now; you don't need to wait until the government allows you to get your nails done again. Make a casserole and leave it on your elderly neighbor's porch if you need something to do so badly.

Digging into the comments section of the group yields similarly enlightened thought:

Well yeah, actually, I can believe this, Sue. You see, that's because the numbers have been jumping every day, because this is a public health crisis that is ongoing and for which we have not yet hit a peak. That is, actually, precisely why these dumb plans to reopen the state of Missouri — your guys' dumb plan, our dumb governor's dumb plan — are, well, pretty dumb.

Great idea, Jesse! Except our dumb governor is a republican, as are the majority of our state legislators and they, uh, tend to work together on things, ya know?

This is some galaxy-brained shit right here, Anthony. If you're actively sick with the virus the government will surely allow you to leave your house, right?

Good luck with buying groceries if you are unable to follow a store policy set in place to help prevent workers at the store from getting sick, Rick! I got a feeling you're gonna cave before they do.

I can help you with this one, Grant: It's because "Dr." Phil is a fucking idiot, and not even a medical doctor. This is a former psychologist who is now just a blathering moron on TV. The specifics aren't the same, but the same line of thinking can be applied to Dr. Oz and Dr. Drew as well. Doctors who have primarily made their livings off of hanging out with Oprah or Adam Carolla rather than, you know, practicing medicine should not be the doctors you are looking to for advice in a time of actual medical crisis.

Oh, I can help you with this one, Jill: This happened because you posted some stupid conspiracy theory bullshit. Avoid doing so if this message hurts your feelings; it'd be better for all of the rest of us, too.

How fucking dare you, Wendy. Last I checked this is America, and my fellow Americans and I have the right to go wherever we want and do whatever we please. Your proposal to restrict my movement in and out of your dumb online group is nothing short of tyranny and will be met with revolution! The Tree of Facebook must, from time to time, be watered with the blood of patriots!

Listen, we could go all day here. The sad fact is these folks have already made up their minds, and their actions are going to get more people sick, and ironically enough are definitely, definitely going to mean that lockdowns will stay in place longer than if you just sat still and chilled the fuck out while the medical professionals get a handle on this thing. You are that group of kids that won't stop talking during a grade-school timeout and thereby keep getting the timeout extended. Fucking stop it!

I get that people are losing their livelihoods. Hell, the RFT itself was near-decimated in the last month as lockdowns cost us our advertisers and forced almost everyone on the editorial side to be laid off. (That whole "this is all a media conspiracy" trope is a pretty dumb one when you actually look at how it actually plays out for newsrooms, isn't it?) I genuinely feel your pain — so many people I know are out of work right now. It's scary as hell.

But your anger is misdirected. Instead of targeting the media organizations that are trying to keep you informed, or the politicians that are trying to keep the death tolls of their constituents down, maybe direct your ire toward the segments of our society that have eroded anything even remotely resembling a robust social safety net over the last 40 years, making us unimaginably vulnerable in a crisis like this while simultaneously funneling all the country's wealth upward to the nation's richest.

And I know this is going to fall on deaf ears, but please know I'm trying to look out for your safety here — not to mention the safety of my nurse fiancée, my 60-plus-year-old parents and my diabetic sister.