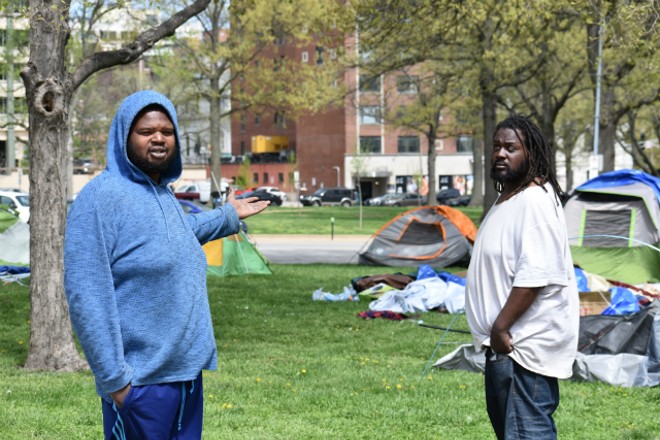 People living in a homeless camp in downtown St. Louis say they woke at 4 a.m. today to a police officer rattling through their pop-up community, telling them to clear out.

Behind the police officers, a crew of city parks employees stood alongside a work truck, apparently ready to haul away any tents left behind.

"They thought that we were just going to leave, and they were going to take our tents," Marcus Hunt, 29, says.


Instead, Hunt and Shakespeare say they referred officers to the Centers for Disease Control guidelines that not only advise against disbanding camps during the pandemic but recommend supporting them with toilets and facilities where people can wash their hands.


Outreach workers and volunteer observers, who'd heard rumors a raid was coming, kept an eye on the camps through the night. When a pair of police officers and eight or nine parks workers arrived in the morning darkness, they began to record the scene on their phones.

"[Police] were going around, rousing people, telling them it was time to go," says Steven Hoffman, a Saint Louis University law student who has volunteered as a legal observer for the National Lawyers Guild.

Once the phones came out and people in the camp pushed back, the tenor of the interaction changed, witnesses say. "It appeared they did not want to be filmed doing this," Hoffman says.

A police sergeant who responded to the scene shortly after the first two officers told the group police were just there to stand by, not throw anyone out. Ultimately, the officers and parks crew left. Jacob Long, a spokesman for Mayor Lyda Krewson, says there was never going to be a forced removal, but the city has tried to persuade those staying in the camp to move into shelters, including a temporary facility at the former Little Sisters of the Poor campus at 3225 North Florissant Road on the edge of the Old North neighborhood. 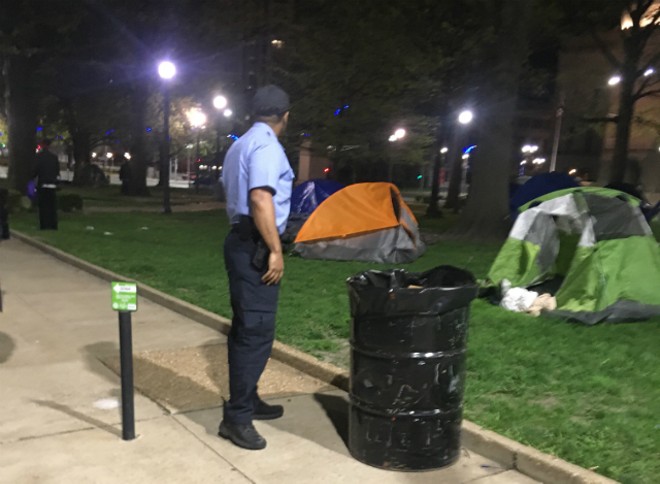 The city is leasing the new temporary shelter, which currently has 26 beds in the former convent but can expand to serve more than 100 people with rooms in an adjacent tower on the property, Long says. So far, only three people have been persuaded to move from the camp, he adds. Long insists the 4 a.m. operation was an "extension of our outreach" and not a failed mission to remove people by force.

The city, Long says, has followed the CDC guidelines against disbanding camps when it comes to more established tent cities by the river. But he says the one downtown is in violation of the curfew for city parks, and it formed after the city began issuing orders for social distancing.

"We can't just allow these to continue to pop up in places that have curfews," Long says. "It's a public safety issue. It's a public health issue, first and foremost."

Asked whether the city planned to send police or parks crews back to force people out in the future, he says he doesn't think so but outreach workers would continue to try to talk people into leaving.

About 35 people have been staying in the park near 14th and Market streets with a smaller camp just to the east, across Market from City Hall. As the city has mostly shut down in response to the COVID-19 pandemic, few of the businesses or other buildings where they might have gone in the past are open. An outdoor hand-washing station left by the city didn't have any water, residents say, so they filled it with water they bought or that was donated.

Hunt says the people living there have created their own governing structure, complete with a treasurer and shared fund for supplies. He's the community coordinator. Shakespeare is the community liaison. For the most part, the two say the community has been able to insulate itself, which they see as protection against the spread of the virus. They don't believe anyone in the camp is sick.

"If one of us was sick, all of us would be sick," Hunt says.

It's not a bulletproof strategy. COVID-19 has proven to be hard to spot, often for ten days or more, before it finally hits. Public health officials have warned that some carriers show no symptoms but are still capable of passing the disease to others. Still, the CDC's recommendations against busting up camps warn that doing so can make it harder for service providers to find people while potentially scattering infected people in all directions.

Shakespeare and Hunt say they worry most about outsiders, such as the police, bringing the coronavirus into the camp. The officers who arrived this morning were not wearing gloves or masks, they say. People in the camp have been accepting donations but only sealed items to minimize potential infection.

Similarly, they worry about going to the city's new shelter, because they're not certain what awaits them there, if they're even admitted. Long says a variety of services, everything from meals to help with resume writing are being offered, but people in the camp are skeptical they'll be treated well.

In the days leading up to the early morning visit, police were driving by recording and photographing them, they say. As Hunt and Shakespeare spoke to the Riverfront Times this afternoon, a pair of state troopers in a Missouri State Highway Patrol pickup truck slowed down in front of the camp, one of them lowering his window and pointing what appeared to be a recorder toward the group.

Such surveillance does not give the people in the camp much confidence that those in government are looking out for their best interests.

"I'm pretty sure they're going to come back," Shakespeare says. "But we know how to stand our ground, legally."