Alton Mayor: No Mercy for Wife Busted at Bar for Violating Stay-At-Home Order 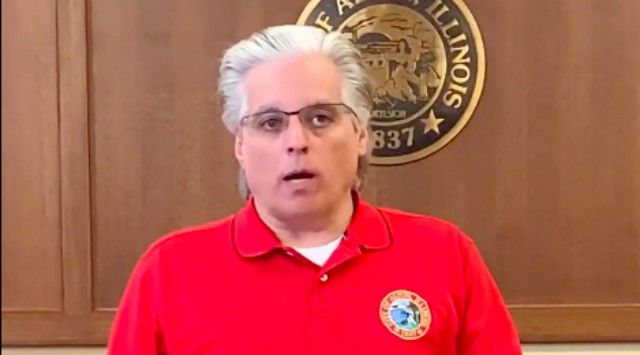 Sounds like social distancing might not be a problem at the Alton mayor's house for a little while.

In a surprisingly candid Facebook post, Mayor Brant Walker revealed his wife Shannon was among a group of people busted at 1 a.m. Sunday at an Alton bar called Hiram's Tavern for violating the state's stay-at-home order — and he's not going to cover for her.

"My wife is an adult capable of making her own decisions, and in this instance she exhibited a stunning lack of judgement," Walker wrote in his post.

He goes on to say he was "embarrassed" and told police to treat Shannon the same as everyone else found to be violating Illinois' stay-at-home order.

"If members of our community will not protect each other and will be so brazen as to gather in public places, we will be forced to take action like we did this weekend without hesitation,” police Chief Jason Simmons told the Telegraph.

In recent weeks, the mayor has urged people to stay home and follow the March 20 order issued by Illinois Governor J.B. Pritzker, closing all but "essential" businesses.

"Our police department has increased its presence in the community, but unfortunately, while patrolling, they have noticed that quite a few of our residents are not adhering to the stay-at-home order mandated by the governor, which has now been extended to April 30th," Walker said on Friday in a video posted to Facebook.

In that post, he said he directed police to use their discretion in issuing citations or arresting violators. After his wife was cited on Sunday, he wrote that she will have to face the consequences for her "ill-advised" decisions.

On Friday, due to the continued increase in cases of COVID-19 in Madison County, as well as increased reports of large gatherings, particularly in some of our city parks, I directed the Alton Police Department to more strictly enforce the Governor's statewide "Stay At Home" order through the use of citations.

The Governor's order states that "All public and private gatherings of any number of people occurring outside a single household or living unit are prohibited, except for limited purposes permitted by this Executive Order."

Walking and other exercise, as well as travel for essential needs, are permitted by the order as long as citizens adhere to CDC guidelines on social distancing.

At approximately 1am on Sunday morning, I was informed by the Police Chief that the Alton Police Department was investigating and stopping a social gathering in downtown Alton that was occurring in violation of the provisions of the statewide "Stay At Home" order.

I was also made aware that my wife was in attendance at this prohibited social gathering. I instructed the Police Chief to treat her as he would any citizen violating the "Stay At Home" order and to ensure that she received no special treatment.

My wife is an adult capable of making her own decisions, and in this instance she exhibited a stunning lack of judgement. She now faces the same consequences for her ill-advised decision as the other individuals who chose to violate the "Stay At Home" order during this incident.

My first and most important priority is the safety and well-being of the citizens of Alton. We are in the midst of a national public health crisis, and I will continue to do everything in my power to ensure that your health is protected, including enforcing the Governor's statewide "Stay At Home" order.

The overwhelming majority of our citizens and businesses are observing the restrictions of the "Stay At Home" order, and for that I am truly grateful. We must all do our part to flatten the curve of COVID-19 so that we can protect our health and ultimately resume our normal activities.

Furthermore, I encourage everyone to join me in thanking the members of our Police and Fire Departments who continue to work every day to protect us during this public health crisis.

I have never been more optimistic about Alton's future, and by working together to flatten the curve of COVID-19, we will emerge from this public health crisis stronger and more vibrant than ever.