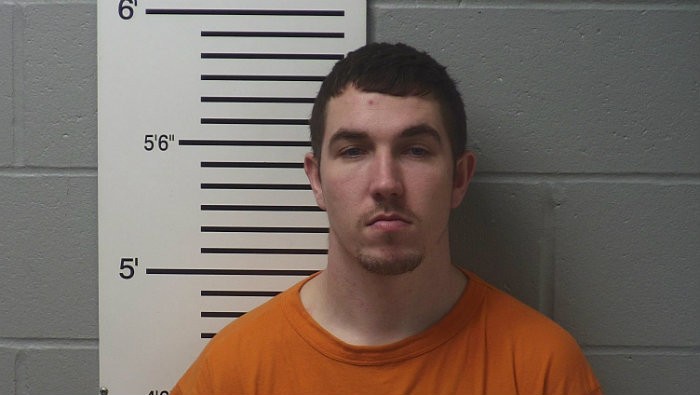 In the video that made him a pariah and got him arrested on a terrorism charge, Cody Pfister does what is at least gross under normal circumstances and infuriating as more people die every day of COVID-19.

"Who's afraid of the coronavirus?" the 26-year-old Warrenton man says teasingly while standing in an aisle of his hometown Walmart. "Don't touch your face?"

And then Pfister leans down and licks a row of deodorant sticks. The video that was posted to Facebook quickly spread across the world. Warrenton police would later say they were contacted by people from the Netherlands, Ireland and the United Kingdom. By the time police arrested him on March 23, both St. Louis County and city had issued stay-at-home orders, restaurant dining rooms were shut down and the first deaths were being reported in Missouri.

In short, even skeptics (not all of them) were beginning to see the danger at the door, and the sight of Pfister's dumb, mocking face enraged people who responded online with furious comments. But Pfister's attorney Patrick Coyne says it's important to consider the time when the video was recorded. In a probable cause statement, Warrenton police say it was March 11 and that the United States officially recognized COVID-19 as a pandemic on March 10.

Coyne says they've incorrectly swapped the dates. The World Health Organization's pandemic declaration was on March 11, and Coyne says the video was actually from March 10.

At the time, St. Patrick's Day parades were still planned, people were still going out to eat and even the loosest of restrictions on crowds in places like St. Louis were still days away. On March 9, NBA player Rudy Gobert of the Utah Jazz thought the growing coronavirus fear was funny enough that he made a point to touch every reporters' microphone on his way out of a press conference. On March 10, President Trump told everyone to relax: "Just stay calm. It will go away."

Coyne says the difference between March 10 and 11 changed everyone's understanding of the virus' spread — "Those two days are gigantic... " — and that should be factored into whether Pfister's actions are truly worthy of the felony charge of second-degree terrorist threat filed by prosecutors. It's even more jarring when comparing March 10 to the time of his arrest, the attorney says.

"If it happened on the 22nd, I'm with everyone else on those comments," Coyne says. "But if you put it in the perspective of the day he did it, it's completely different."

Pfister spent three days in Warren County jail. By the time he bonded out, the fact that Gobert had tested positive for COVID-19 and the NBA had suspended its season had become just one tremor in a cascading disaster. By then, death threats were pouring in as the video and news stories about the incident continued to spread.

Actor and director Michael Rapaport, who has been wailing on Trump's response to the coronavirus during his popular podcast, interviewed Pfister during an Instagram live broadcast.

"What the fuck made you lick the deodorant at Walmart?" Rapaport demanded.

Pfister explained that he thought it would be more of an inside joke, pranking a friend who had been extremely worried about coronavirus. He let another friend post it to Facebook, he said.

"I was like, I'm not even scared of it if it's not a big deal, because the government's not making it a big deal," Pfister told Rapaport. "The next day it was declared a pandemic. I was, 'Holy shit, I might've did something really bad.' A couple weeks later, yes, I was arrested and realized it was really bad."

The 26-year-old was apologetic in the interview. He said he never meant it as a threat, adding that he has tested negative for COVID-19.

"I want to let everyone know I really am sorry," Pfister told Rapaport. "I didn't know it was a big deal. Now that they started closing everything down, I realized this is really serious. I have older people in my family that I don't want to get sick."

Rapaport blasted him as a "dumb fuck" but ultimately concluded it was just a stupid move, especially given the timing.

"Everybody fucks up, you just fucked up on an international level," the actor told him before wishing him well.

It's not going to be so easy for Pfister going forward though. He was on parole for a 2013 conviction for burglary and stealing a gun, and with the attention of his latest arrest, it wasn't long before his parole officer wanted to talk to him. That led to a parole hold, and he's now back in jail in Lincoln County, officials there confirmed.  Coyne says with courts largely shut down and cases delayed, it could be a long time before Pfister has an opportunity to go to trial.

"This guy is going to be sitting in jail for months, awaiting trial," Coyne says.

In the interim, he has asked for bond in the Walmart case to be revoked so that Pfister will at least get credit for time served when his case finally gets called. Coyne says he could see an argument for some kind of misdemeanor charged for peace disturbance or something, because Pfister clearly messed up, but the felony is overkill.

March 10, he says, was a different time for all of us:

"People were joking about it, the corona, drinking beers."