Data Show Abortion is Already Effectively Over in Missouri 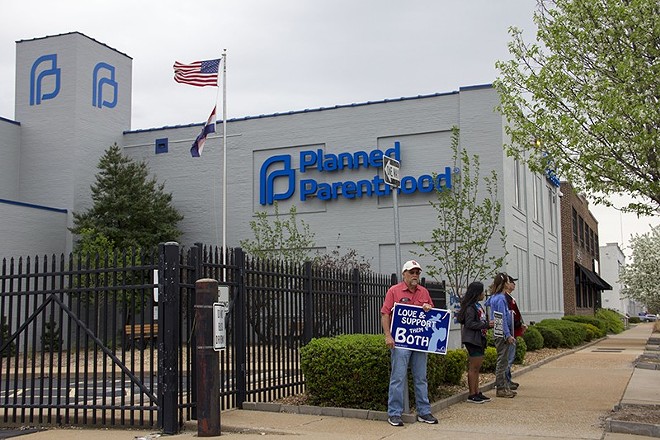 For months, Missouri health advocates have anxiously waited for a judge's ruling that could end abortion services in the state's last remaining abortion clinic, located in St. Louis — but new data shows that, practically speaking, abortion has already effectively ended in Missouri.

There's a big caveat, however, and it's actually good news for reproductive access: According to the data released this morning by Planned Parenthood, the drastic fall in Missouri abortions is offset by the simultaneous surge in procedures performed across the border in Illinois, where Planned Parenthood opened a new clinic late last year.

That clinic, in Fairview Heights, was constructed in secret and began offering abortions in October; that month, it recorded 96 abortion patients. Four months later, in February, it recorded 323.

In a press release today, a Planned Parenthood spokeswoman explained that spike is connected to the fact that "the vast majority of Missouri residents seeking abortion are crossing state lines just to get care." According to the data, which was first reported this morning by NPR, Planned Parenthood's clinic in St. Louis' Central West End neighborhood has seen its number of abortion patients fall to single digits.

The numbers show St. Louis' Planned Parenthood performed abortions for just three patients in February — a drop from the 174 recorded in February 2019.

In a statement, Yamelsie Rodríguez, President of Reproductive Health Services of Planned Parenthood of the St. Louis Region said, "When our patients weigh their options, it’s clear to them that abortion access is so difficult in Missouri that the majority of people choose to cross state lines instead of accessing care in their home state."

As we've previously reported, Missouri's current impasse over abortion rights is hung up in an administrative court, where a state judge has spent months deliberating about whether Missouri's Department of Health and Senior Services improperly rejected Planned Parenthood's application to renew its clinic's abortion license. That issue is separate from an eight-week abortion ban, signed into law last summer by Governor Mike Parson, which would make the vast majority of abortions illegal in the state and lacks exceptions for rape and incest. The law remains tied up in federal court.

Here's the pertinent data released by Planned Parenthood today, showing the see-saw like change in abortion numbers between the organization's clinics in St. Louis and Illinois: