William Sprague took pictures of his daughters as they played with the rocks this morning outside of Kiener Plaza Park. Sprague brought them to Joe Biden's rally to show the two young girls how the political process works. One will be going from eighth grade to high school when the next election rolls around, and Sprague does not want them to learn about politics blindly.

"If we start bringing them to rallies and showing them how the political process works, they'll be less susceptible to the lies we see now," Sprague said. "Particularly, the lies of the Trump administration. They'll be able to point and identify the truth better."

Biden visited St. Louis for an 11 a.m. rally as part of a Missouri campaign swing that included an afternoon stop in Kansas City ahead of the state's Democratic primary. His rival, Vermont Senator Bernie Sanders, is scheduled to visit St. Louis on Monday.

As the hours passed this morning, Kiener filled with hundreds of supporters. There was every stage of life in the park, every race, and there were dogs. High schooler Maddie Swick and her friends were interested in hearing what the former vice president had to say.

Swick identified herself as a Biden voter, while her friends remained unsure, particularly because they won't be able to vote until the general election in November.

Luke Daus was another member of the younger crowd, but one with a different reason for being there. The aspiring social media provocateur carried a sign in one hand that read "Joe Biden is a Pervert" and a microphone in the other he used to shout to the crowd, inspiring plenty of confrontations.

"There's been a lot of 'fuck yous,' a lot of middle fingers," said Daus, who previously trolled the St. Louis Women's March.

A woman stopped and asked Daus about his sign. He said there was a video circulating on YouTube that shows Biden touching women inappropriately.

A pair of people stopped and tried to cover Daus' signs with their Biden 2020 signs. One woman stood in front of Daus for an extended period of time. Eventually, the Ridin' for Biden crowd was fed up with Daus and an attendee took his sign and ran off.

No, he did not get it back. The sign went down the sewer.

The United Congregations of Metro East was also there in protest of the Democratic nominee candidate. The members of the organization held signs that read "What about us, Joe?" and "What about East St. Louis?"

Cheryl Sommer, president of UCM, explained the East St. Louis-based organization invited both Democratic candidates to a forum planned for tomorrow in East St. Louis. Sommer said the Sanders camp is sending a surrogate, but Biden is not.

Another attendee, Shannon Villa, has supported Donald Trump's policies in the past. Although he identifies as a lifelong Democrat, Villa said Trump has had a few points about businesses while he has been in power. However, Villa attended the rally in support of Biden.

"He's a moderate, old-school Democrat," Villa said. "He's the best chance of beating Trump. Biden and the Democrat party have always felt overwhelmingly welcome, and when I'm voting, I have to keep the rest of the population in mind."

The candidate spoke for about 10 minutes. He talked of unifying the party, climate change and defeating Donald Trump. At that point, a cluster of pro-Trump supporters erupted into a chant. The Biden crowd responded with their own chants.

"Ignore them," Biden told the crowd. "These guys are doing what Trump does."

Before Biden took the stage, Boyd set a goal for St. Louis:

When the rally was over, the sea of blue shirts filed out group by group with the cardboard letters spelling out "JOE" hanging onto the posts with the Arch in the background.

Missouri votes on Tuesday for the Democratic nominee. 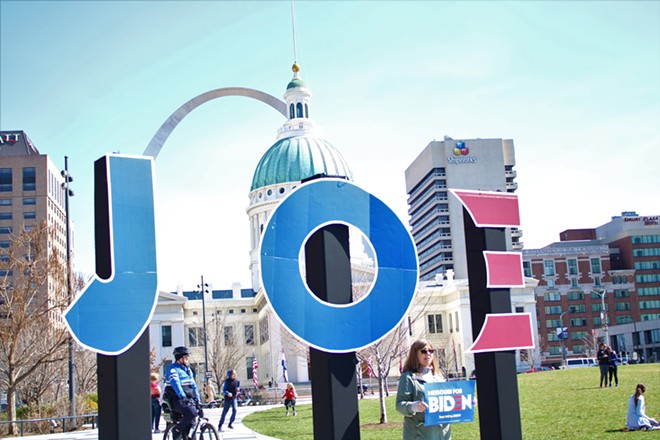