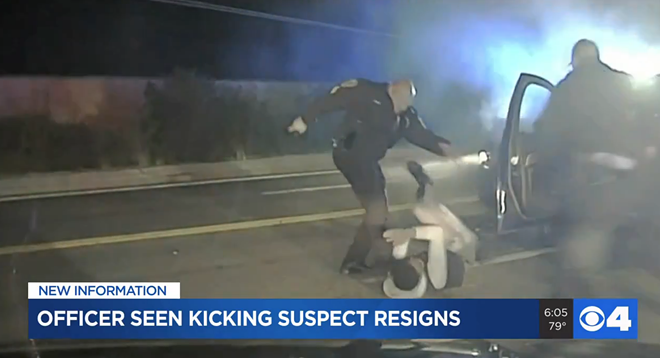 A suburban St. Louis cop who was caught on video kicking a man in the head has been indicted on a federal charge.

Breckenridge Hills police Officer David Maas was working for Woodson Terrace on April 14, 2019, when he was involved in a high-speed pursuit of a car that had been reported stolen. In a dash cam video first aired by KMOV, the man is seen stepping out of the car and raising his hands before dropping to the ground. An officer, later identified as Maas, rushes into the frame with his gun in his hand and starts kicking the man, connecting at least once with his head.

Maas resigned as the Woodson Terrace police department began an internal investigation, and he later landed a job at Breckenridge Hills.

In an indictment unsealed today, Maas was charged with one count of deprivation of rights under color of law for what federal prosecutors described as an assault.

The man in the video, Isaiah Forman, has sued Maas. He alleges that he had surrendered when the officer started kicking him in the head, chest and body. Along with the terror of the beating, Forman says in the federal lawsuit he suffered a brain injury.

In a court filing, Maas denies the claims in the civil suit and says he acted in "self defense."

The FBI investigated the case and didn't see it that way.

"When an officer betrays that oath, and instead uses his or her position to violate a person's constitutional rights, that officer must be held accountable,"  Special Agent in Charge Richard Quinn of the FBI St. Louis Division said in a statement. "Our community, and our profession, deserve no less."

If convicted, Maas could face a maximum sentence of ten years in prison and a fine of $250,000.

BREAKING: Woodson Terrace Police Department confirms officer kicking suspect is a Sergeant with their department. Chief is not releasing his name and can’t confirm if he is on leave @KMOV #KMOV pic.twitter.com/KKfLp9QL5r


Correction: The original version of this story incorrectly reported the department David Maas joined after leaving Woodson Terrace. We regret the error.