Since the day Alex Garcia took sanctuary in a Maplewood church nearly two and half years ago, his family and supporters have tried a little of everything to persuade federal immigration officials to let him stay in this country.

They have gone to Washington D.C. to meet members of Congress at their offices. They've collected hundreds of signatures from people living in the family's former hometown of Popular Bluff. They've marched and organized, hired lawyers and prayed.

And yet, they still couldn't get past the front door of the Immigration and Customs Enforcement office in St. Louis this morning.

On Tuesday night, Maplewood issued a proclamation in favor of allowing Garcia to remain in the United States, and Greenberg went this morning with St. Louis Alderwoman Annie Rice and Alderwoman Megan Ellyia Green to hand deliver an application to delay an immigration judge's order from 2000 to deport Garcia to his native Honduras.

See Also: ICE Ordered Alex Garcia to Report for Deportation. He Took Sanctuary in a Maplewood Church Instead

The idea was that maybe three elected officials would succeed where his family had failed in attempting to get ICE to at least review their latest application. Garcia's wife Carly had tried in September 2017 to submit forms but was told to go away. A contingent of a dozen pastors tried again in October 2017. ICE officials locked the doors to the office and sent Department of Homeland Security officers who handle security for the Robert A. Young federal building to cut off the pastors off before they arrived. After a tense standoff, during which the pastors were threatened with arrest, an ICE supervisor agreed to take the paperwork for review. The application was rejected three weeks later.

This morning, ICE officials again refused to accept the paperwork, telling the three that accepting the earlier application from the pastors in 2017 had been a mistake. As far as ICE is concerned, Garcia is an uncooperative fugitive. An agency official told the Maplewood mayor and two St. Louis alderwomen that they would need a supervisor in Chicago to review the paperwork.

That's difficult maneuver, given that the St. Louis officials won't even receive the application to pass along, says Rice, who is also an immigration attorney. Another avenue would be for Garcia to come in for an interview with ICE agents, the immigration officials suggested.

Garcia's deportation order is from an early attempt to enter the United States after leaving Honduras. He was caught and deported in 2000 but returned four years later and settled in Poplar Bluff. In the fifteen years since, he has built a life as a tireless construction worker, father and husband. He and Carly have been married for a decade and they have five kids between them. She and the kids are all U.S. citizens.

In the past, the family worked with an attorney in hopes of securing citizenship for Garcia as well, but the deportation order from 2000 effectively cuts off that path. He would have to return to Honduras and restart the process from there. That would take ten years under normal circumstances, immigration attorneys say, but the Trump administration has not only sought to toss out people like Garcia, it has choked the pathway to legal entry as well. If Garcia was forced to leave, his family worries he might be kept from ever returning.

Under the Obama administration policies that prioritized violent criminals rather than people DHS had screened and determined were not a threat, Garcia was granted year-long delays of the deportation order in 2015 and 2016. But his annual request was denied in 2017 after Trump's election, and he was sent a letter ordering him to report for deportation. Instead, he took sanctuary in Christ Church in Maplewood and has lived there ever since.

In July, U.S. Representative Lacy Clay (D-St. Louis) introduced legislation that would give Garcia status as a permanent, legal resident. Garcia's supporters are hopeful the "private bill" will be adopted, but they've continued to push on as many fronts as they can.


While Rice, Green and Greenberg were at the ICE office, Garcia's wife and supporters held a news conference in St. Louis City Hall.


"This is an amazing family, and Alex is — this is no hyperbole — he is the hardest worker I've ever met," says the Rev. Rebecca Turner, pastor of Christ Church. "He is a contribution to the community."

At first, the group was hopeful that ICE would respect the three elected officials enough to take the application. Sara John of the St. Louis Inter-Faith Committee on Latin America, an organization that has led efforts to help Garcia, said it was easy for ICE to turn Carly and her kids away, and they wanted to see if a different approach would change the outcome.

"The question is how much power and authority will it take until they do the right thing and say, 'Yes,'?" she said.

Throughout the morning, she traded text messages with Rice and read the updates to the group. Shortly before 10:30 a.m., she delivered the bad news. ICE officials had taken the inch-thick stack of papers for about 45 minutes but then handed them back, refusing to accept and pass them on or even stamp them as a rejected application. Officially, ICE never even received them.

Carly's eyes welled with tears as the group circled up. It wasn't completely out of the question that ICE would accept the paperwork, and there is still the occasional case that leads to a stay of deportation, even under Trump. Just Wednesday, an immigration judge had ordered a stay for another Honduran immigrant, a woman seeking asylum after she was stabbed in the stomach by her partner, who had been living in sanctuary for two years in North Carolina.

But this morning's refusal to even review the request was another blow. On the first floor of City Hall, Turner began to sing and was joined by the group. 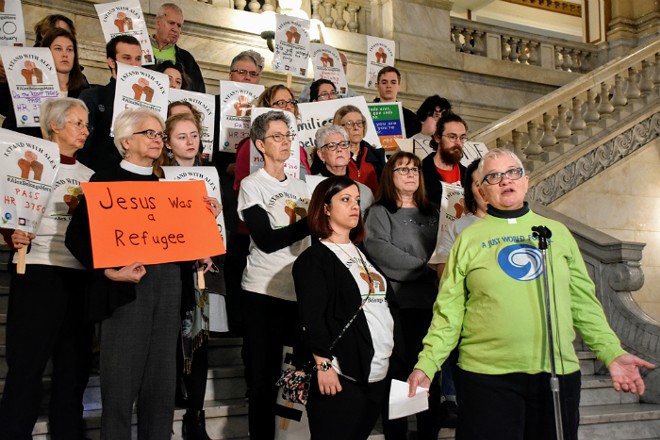