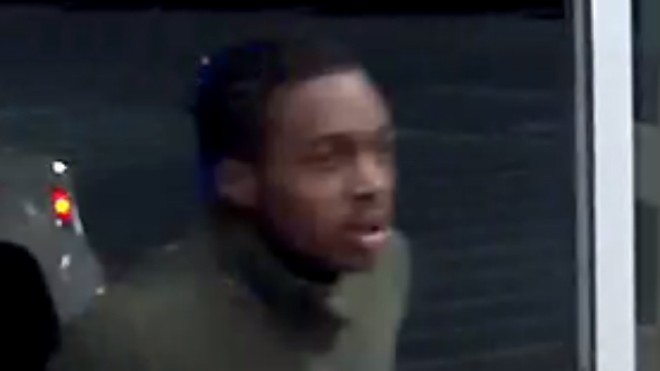 Police across greater St. Louis were still searching on Monday morning for a shoplifter who shot a police officer who was working security on Sunday evening at a Walmart in Ferguson.

Shortly after 7 p.m., the off-duty Calverton Park police officer confronted the man near the store's exit. Authorities say the man pulled a gun and fired multiple rounds, hitting the 35-year-old officer two or three times — once in the arm and one or two times in the torso.

The gunman ran, and St. Louis County Sgt. Benjamin Granda told reporters on Sunday that investigators believe he probably got into a car during his escape. The officer, who was wearing his police uniform and a bulletproof vest, was taken to the hospital where his condition was described as stable.

"We're very thankful he was wearing a vest," Granda said.

After searching through the night, police released still images from surveillance video of the suspected shooter. He is estimated to be between 20 and 25 years old, as tall as five foot eight and as heavy as 160 pounds. His hair was braided into a small ponytail, and he wore a green jacket, gray sweatpants, Nike sandals and black socks.

"He should be considered armed and dangerous," police said in a news release.

The officer has been in law enforcement for about two and half years. He was working a side job as store security when he confronted the suspect. He did not fire at the man, police said.

It's not clear what the man is believed to have stolen from the store.

"For somebody who's shoplifting," Granda said, "I can't tell you whatever merchandise that person had, but it's not worth taking someone else's life over. I can tell you that."

Authorities ask anyone with information to call St. Louis County Police at 636-529-8210.