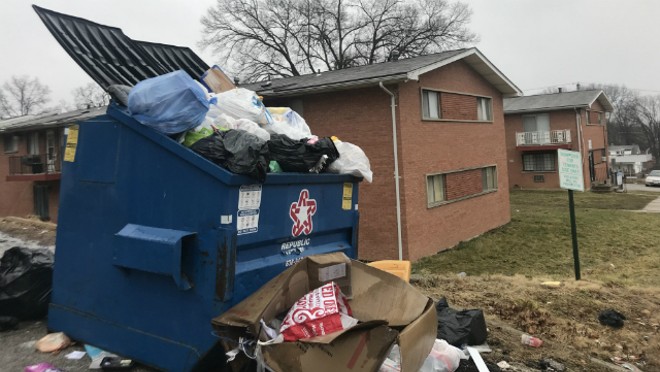 Sylvia Benford lived in the Blue Fountain Apartments in north city’s Baden neighborhood for ten years, the first nine of which she says were pretty good. But about a year ago, conditions took a turn for the worse. Maintenance requests got no response. She saw empty units burglarized and thieves strip them of appliances and copper wire.

Then, in January, the empty apartment across the hall from hers was broken into and she heard its contents being pilfered. Sylvia, 65, called the police. Officers chased off whoever had broken in, but about half an hour later, the intruders were back and now Benford feared retribution from whomever she’d just called the cops on. She left in short order.

“I just threw all my stuff in a bag and put all my furniture in storage,” she said. “I didn’t have another apartment or any anywhere to go, but I was afraid they were going to break my windows out in my apartment.”

The 103-unit Blue Fountain complex is owned by TEH Reality, the embattled landlord that has drawn heavy criticism during the past year from lawmakers, media and tenants' rights organizers for their mismanagement of low-income housing in the greater St. Louis region and throughout the Midwest. In the past three months, TEH has lost custody of the Southwest Crossings Apartments in Carondelet and the Springwood complex in Bel-Ridge when courts ordered those properties go into receiverships.

More recently, the company has been under increasing fire from lawmakers and the press about Bridgeport Crossing in Bridgeton, where last week residents were served eviction notices and sued for back rent despite living in units with no heat. At its peak, TEH owned about a dozen complexes in the metro area. Amid all the turmoil, conditions at other TEH properties like Blue Fountain have largely remained off the public’s radar.

With a completely absent landlord and no one to even pay rent to, many residents still living at Blue Fountain feel themselves in an uncomfortable gray zone between being tenants and squatters.

A recent visit to Blue Fountain found trash overflowing from the property’s three dumpsters. Several units’ doors sat wide open, revealing apartments with sinks lying broken on floors and stretches of wall missing plaster. Along one side of the complex, at least a half-dozen air conditioning units appeared to have been stolen, with only the metal bases bolted to the cement left behind. Neighbors Bruce Long and James (who didn't want to give his last name) stood outside their units bemoaning the disarray and deterioration around them.

James has lived at Blue Fountain for almost a decade. Long arrived here a little more than a year ago, which was about when conditions started going downhill. Both men confirmed Benford’s story that theft from the empty units is rampant. James hasn’t bothered requesting service for a broken garbage disposal and cracks in his wall. Neither has Long for a non-functioning buzzer. The super quit long ago. James deposited a check in the leasing office lock box for January’s rent, but he isn’t sure anyone ever came to get it. He doesn’t plan to pay for February and hopes to be living elsewhere by March.

There are still signs posted around the property — dated November 22, 2019 — saying that a new company is coming in to manage Blue Fountain and a meeting would be held in a few weeks to address residents' concerns.

He hasn’t seen any sort of property manager in the two and a half months since. According to public property records, TEH still owns Blue Fountain, and according the city’s assessor’s website, they haven’t paid property on it in the past three years. An email to TEH associate Michael Fein was not returned. 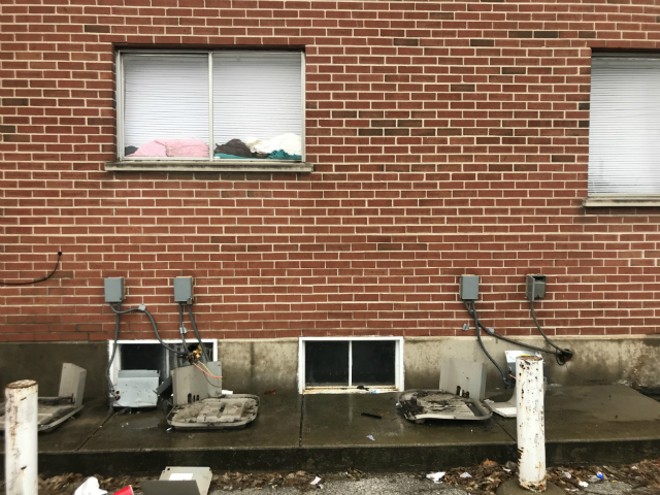 The Blue Fountain complex straddles Gustav Avenue off of Broadway, and the units on the south side of the street are in marginally better shape than those on the side where James and Lee live. Still, a cursory look in the buildings south of Gustav shows units that are in severe disrepair with significant standing water and a laundry room filled with washers and dryers ripped from the walls.

A St. Louis-based attorney who both works with landlords in receivership cases and defends tenants from unlawful evictions said this about TEH: “It should not confuse you what is happening. TEH’s investment in St. Louis' low-income housing went south. They paid too much for the properties initially; they pulled all the cash out as they were managing and did not reinvest any; and they were poorly managed, to the extent they really managed at all other than collecting rents.” The attorney didn’t want to give his name as it’s a small community of people who work in this area of law in St. Louis and speaking out against a real estate company, even one with as bad a reputation as TEH, can lead to blowback.

TEH properties have been consistently under fire on the other side of Missouri as well. Last week, the ABC-affiliate in Kansas City ran a piece about the deteriorating conditions on the Nob Hill apartment complex there.

For former TEH tenants like Benford, leaving a crumbling complex like Blue Fountain can present a new set of problems. When I spoke to her she was at her granddaughter’s house and was headed to stay the night with a cousin.

“I really don’t have anywhere to stay,” she said. “I’m living on a wing and a prayer.”