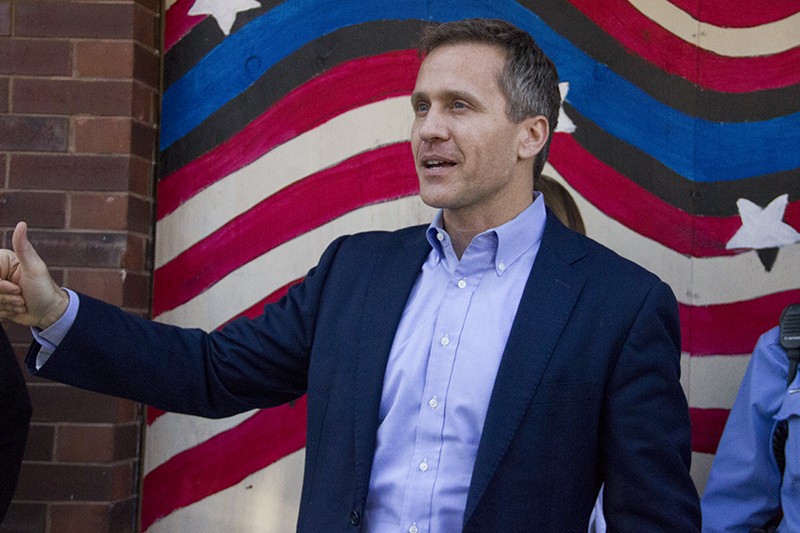 After 622 days of silence, the former Missouri governor took to social media to declare he'd been "fully exonerated" in a post that not only teased a possible political future, but demonstrated that Greitens is just as savvy as ever at mimicking the successful talking points of President Donald Trump.

"We've been fully exonerated," Greitens wrote, before quoting a portion of a consent decree he'd signed with the Missouri Ethics Commission, or MEC — pointedly, however, he did quote the part about how the MEC found "no evidence of any wrongdoing on the part of Eric Greitens," leaving out the portion of that consent decree which fined him $178,000 for two campaign finance violations from 2016.

But while "fully exonerated" isn't accurate, the MEC's action was good news for the disgraced former politician: According to the MEC's decision, released Thursday, the state investigators dismissed all but two of the complaints directed at Greitens' 2016 campaign for governor, and those violations amount to fairly run-of-the-mill issues for most campaigns: One involved a failure to report in-kind contribution from a PAC that paid to place TV attack ads in Springfield; the second was a similar violation stemming from the Greitens campaign failing to disclose an in-kind contribution for polling data it received from the "dark money" group known as A New Missouri.

In both cases, the commission noted that Greitens had not been directly involved in coordinating the campaign actions involved in the violations. That's a far cry from the campaign of "criminal enterprise" alleged by Republican Rep. Jay Barnes (R-Jefferson City) shortly after Greitens' resignation in June 2018 — and in this case, Greitens won't even have to pay the full $178,000 fine as long as he can come up with $38,000 within 45 days.

Indeed, according to the MEC, the commission's investigation covered "235 pages of supporting documentation; the issuance of 23 subpoenas, which resulted in the production of roughly 8,000 multi-page documents, emails and videos [and] approximately 20 interviews."

After all that, it concluded: "The MEC found no evidence of any wrongdoing on the part of Eric Greitens, individually, and no evidence that Governor Greitens knew of the two reporting violations below."

Totally absent from the MEC decision, however, is any mention of the twisting scandal that took the governor down in 2018. That's where things got really, truly weird: Rather than campaign finance violations or "dark money," Greitens' fall began with an admission of adultery followed by allegations that he'd blackmailed the woman with whom he had the affair. He then faced criminal charges for invasion of privacy — charges which would eventually be dropped by St. Louis Circuit Attorney Kim Gardner.

That was the mess in 2018 — and it's only gotten messier. Gardner's former investigator, William Tisaby, is facing multiple felony charges for perjury stemming from a deposition he gave to Greitens' defense attorneys.

This backstory makes the recent Greitens' announcement curious: He doesn't just circle around the six-figure fine for campaign violations, but attempts to casually pack his past scandals beneath the banner of "fully exonerated."

And it isn't subtle at all. Immediately after quoting from the MEC consent decree, Greitens' Facebook post continues:

This news makes clear what many of you knew all along: In 2018 our justice system was abused. Lies were told and bribes were paid in a criminal effort to overturn the 2016 election. And now, the truth is beginning to come out.

Some of the people who made up false charges against me have now been charged with seven felonies for what they did: They lied under oath and they tampered with evidence. And there is more to come.

Of course, this wasn’t really about me. It was an attack designed for one purpose: to overturn your votes, because we were fighting for you.

All of this sounds very familiar: "Fully exonerated" were the same words with which Trump described his acquittal at the Senate impeachment trial; Both Trump and his lawyers have hammered the argument that Democrats are trying to overturn the 2016 election.

Between his bombastic outsider campaign and dismissive attitude toward traditional news sources, Greitens has long been compared to Trump. But while the president now has Republicans marching in lockstep, in 2018 the Republican-dominated government in Missouri, including then-Attorney General Josh Hawley, turned against Greitens.

So perhaps Greitens is looking for his comeback — or at least a bit of reconciliation. Toward the end of the Facebook post, Greitens quoted from the Biblical story of Joseph, specifically the moment when Joseph, who had risen to power after being betrayed by his brothers, finds himself in a position to save or destroy them. In the story, Joseph forgives them: "As for you, you meant evil against me, but God meant it for good."

If Greitens is signaling to Missouri Republicans that he's ready to forgive and forget, he couldn't have chosen a better time. As Republicans line up behind a president untethered from accountability, maybe there's room for a former governor with a similar populist appeal.

"Many people have asked about revenge," Greitens' Facebook post concluded. "That’s not what we need. Revenge is about the past. Justice is about the future. And, I’ll tell you, the future is bright."