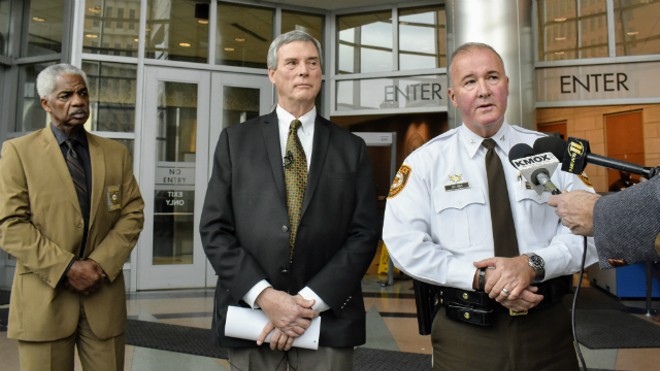 Belmar, who served as chief for six years, had weathered rough stretches during his six years leading the force. He took over in 2014 just months before eighteen-year-old Michael Brown was killed by Ferguson police Officer Darren Wilson. In recent months, he has faced calls for his resignation sparked by the jaw-dropping discrimination lawsuit by a gay sergeant who was passed over repeatedly for a promotion.

St. Louis County Executive Sam Page announced on Twitter this morning that Belmar had decided to retire. Page noted the chief had taken over during a difficult time and had created a diversity unit and helped secure a tax increase to raise officers' salaries.

"Thanks for your service," Page added.

Today, Chief Jon Belmar announced his retirement. He took over a department during difficult times. During his tenure, he created the Diversity and Inclusion Unit and obtained voter approval of Prop P, allowong police officers the raises they deserved. Thanks for your service.


The police department sent out a news release shortly after, highlighting a 34-year career with the county. During his tenure as chief, the department swelled to 1,020 officers and 342 professional staff employees — a significant jump from the 853 officers and 276 staffers when he succeeded retiring Chief Tim Fitch in 2014.

Belmar's future had seemed rocky since October when the county lost a discrimination lawsuit to Lieutenant Keith Wildhaber in stunning, and expensive, fashion. Wildhaber, then a sergeant, contended that the department leadership, including Belmar, denied him promotions nearly two dozen times because of his sexuality.

A jury awarded Wildhaber a nearly $20 million verdict. After the verdict, the county promoted Wildhaber and installed him as the head of a new diversity unit.

Page also replaced four members of the five-person St. Louis County Board of Police Commissioners, the board that oversees the police chief.

"For months, I have been listening to council members, police board members, the police chief, activists and community leaders about the police department's future," Page said in a statement days after the verdict. "The time for leadership changes has come, and change must start at the top."

The county executive referenced those comments in a follow-up statement today.

"I have said all along that change begins at the top and it did, with my appointment of 4 new members to the five-member Police Board," Page said in the statement. "I encouraged Chief Belmar to lead the Police Department through the transition and he has."

Page added that Belmar had previously told him he was considering retiring this year, so his decision seemed to be "in the natural course of his plans. His career is long and accomplished, and I appreciate the work he has done."

In October, county Councilwoman Lisa Clancy called for Belmar's resignation, citing a problematic "culture" within the department. After today's announced retirement, she tweeted that it was "the right decision for St. Louis County. I wish Chief Belmar the best in his retirement."

In his statement, Belmar thanked his officers but gave no reason for his retirement.

“It has been an honor to work with and for the women and men of the St. Louis County Police Department," Belmar said in the news release. "The dedication, sacrifice, and bravery of those that work for this Department is unmatched. The citizens and businesses of St. Louis County deserve nothing but the best, and I firmly believe they receive that from us every day.”

Chairman of the Board of Police Commissioners Ray Price also released a statement, thanking Belmar.

Belmar's last day is scheduled to be April 30. Page said he has already begun discussing the department's future leadership with the police commission.