No Matter the Source, Marijuana Patients Can Possess Weed in Missouri 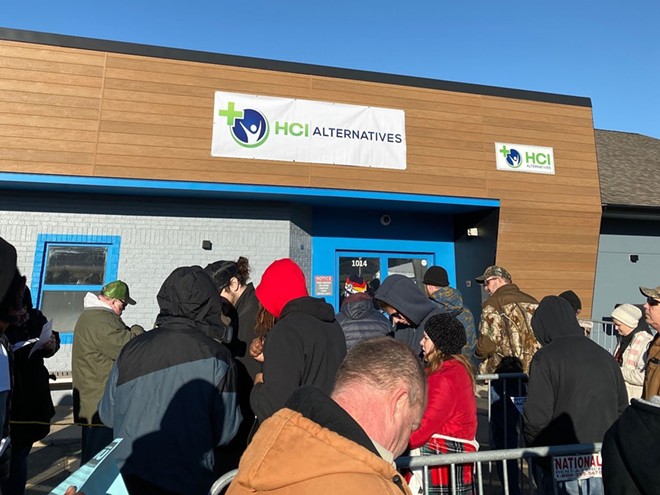 Missouri may not have any dispensaries capable of supplying patients with legal medical marijuana, but state health officials support your right to do so — even though that means, by necessity, breaking the law.

It's an opinion shared by the St. Louis County Police Department, which issued a statement to RFT this morning clarifying that its officers will not arrest state-approved patients who've somehow come into possession of marijuana.

"If individuals are in possession of marijuana and possess a valid and legal prescription we will uphold their constitutional rights and they will not be arrested," writes department spokeswoman Tracy Panus. "We will not arrest individuals based upon the assumption the marijuana was obtained illegally."

The department's position follows the release of a letter by the state's top marijuana official, who this week weighed-in on the strange legal situation faced by medical marijuana patients in Missouri. On one hand, the first of the state's 192 approved dispensaries are still months away from opening. But as of this month, nearly 30,000 patients are holding medical marijuana identification cards.

Right now, those cards are useless for their stated purpose. The predicament hasn't gone unnoticed. Lyndall Fraker, who serves as the Department of Health and Senior Services' aptly, and very awesomely, titled Director of Medical Marijuana, wrote in a January 28 letter that he had been moved to explain the DHSS' understanding of the issue "at the request of several law enforcement entities and legislators."

Fraker's letter started by summarizing how Missouri got into this situation. Bound by Article XIV of the Missouri Constitution — which was amended in 2018 by the successful ballot initiative that legalized medicinal marijuana — the department was obligated to accept applications. Even without dispensaries, the DHSS followed the schedule laid out in the amendment, and so it went about approving its first marijuana patients this past June.

It's that constitutional obligation which, on paper, gives patients the right to have their own weed. Toward the end of the two-page letter, Fraker wrote (emphasis ours):

For both facilities and patients, once in possession of marijuana, all of the rights and protections outlined in Article XIV apply without caveat...


In the letter, Fraker acknowledged that the situation "was inevitable" given the schedule determined by the state constitution. He noted that "the realities of preparing medical marijuana" includes months of cultivation and testing, and the delay "guaranteed that medical marijuana would not be ready for sale in dispensaries until well after the first facilities were licensed."

Now, the inevitable has arrived.

That's the contradiction, the red-eyed elephant in the room. "Article XIV does not address this question," Fraker continued, adding the situation is a "difficult reality that there is no legal method of initially acquiring marijuana."

"Unless," he added, "that marijuana is somehow discovered in the wild."

So, yes, in the unlikely scenario that one stumbles into a wild bramble of free-growing vape cartridges and THC gummies, the Missouri Constitution would have your back. But taken in total, Fraker's letter still leaves open the core contradiction facing patients. DHSS is declaring that the rights and protections "apply without caveat," but Fraker's letter ends with just that.

"We realize this letter may not provide as much guidance as many have hoped to receive regarding how to proceed in this new legal environment," Fraker wrote. He concluded by advising that anyone "navigat[ing] the many complex circumstances that will arise regarding possession" should ask a lawyer about their "specific circumstance."

So there you have it. Medical marijuana patients are legal. Their possession of marijuana is legal. There's just no legal way to purchase it.

It bears remembering here that Missouri's health officials and marijuana regulators are not in charge of police, prosecutors or your local municipal judge — and that this issue isn't just playing out as a discussion of constitutional rights. Take Jamie Wilson. Charged with marijuana possession in December, his attorneys argue that his arrest was illegal because he is card-carrying medical marijuana patient.

In that case, Wilson was arrested in Daviess County, about hour's drive north of Kansas City, after he was pulled over by a state trooper. He was also apparently being tailed by the local drug task force, which had suspected him of buying marijuana in Independence.

According to a report by Kansas City NBC affiliate KSHB, a search of Wilson's truck found eight ounces of marijuana in a backpack, which is within the constitutional limits of the Missouri's medical marijuana law.

Still, Wilson was arrested and charged not only with possession, but with child endangerment, as Wilson's four-year-old grandson was reportedly riding in the truck during the incident. On Thursday, according to online court records, Wilson's lawyers submitted the letter by the DHSS' Fraker as an exhibit in defense of their client.

Here in the St. Louis region, top prosecutors in St. Louis County and St. Louis City set policies to not file charges on most marijuana possession cases. Still, possession is a crime that can get you cited or arrested by city police.

In an email, St. Louis Metropolitan spokeswoman Evita Caldwell wrote, "The police department is monitoring these changes and is prepared to adapt enforcement procedures accordingly." But she adds, "However, we will continue enforcing applicable local, state and federal laws which regulate controlled substances, including marijuana."

It's not clear how the contradiction will be resolved in court. On Thursday, RFT reached out to DHSS by email to seek further clarification on how patients can go about possessing weed that seems to be both legal and illegal at the same time.

She added, "However, we cannot advise anyone on how to obtain product."