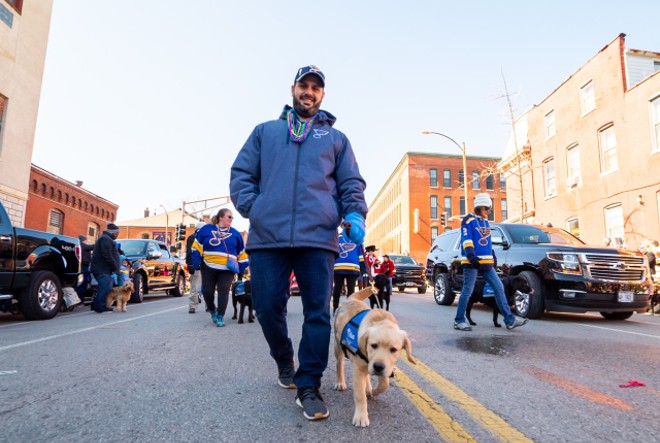 This time last year the St. Louis Blues were really starting to heat up. Many folks rightly credit Craig Berube, who was named interim coach in late 2018, and goalie Jordan Binnington, who officially joined the team in late December, as being instrumental in the Blues going from worst to first last season.

This is all true, of course, but we also can't forget another valued member of the team: Barclay the dog. The pupper was "adopted" by the Blues in 2018 and quickly helped bring the team together with his sheer cuteness.

Now, for the second consecutive year, Barclay will lead another group of St. Louisans as a grand marshal in the 27th-annual Purina Pet Parade. Hosted on Sunday, February 16, in Soulard, the Purina Pet Parade will be led by Barclay, an assistance-dog-in-training, along with St. Louis Blues legend Bob Plager and KSDK broadcaster Kelly Jackson. Last year marked the first time a four-legged friend led the parade as marshal — but in our opinion, Barclay deserves it. After all, he's a very good boy.

“The Pet Parade is a St. Louis Mardi Gras tradition the whole family can enjoy, and it aligns with our belief at Purina that people and pets are better together,” Daniel Koehler, lead community affairs specialist at Purina, said in a statement. “We can’t wait to fill the streets with people and pets for what we think is one of the best events of the year in our hometown.”

As always, pet owners are encouraged to attend the parade with their costumed puppers and kittehs for the small donation of just $10 per furry friend. All proceeds benefit Open Door Animal Sanctuary in House Springs. You can register you and your companion animal at purinapetparade.com. The fun starts at 1 p.m. at 12th Street and Allen Avenue in Soulard and ends at Soulard Market Park.

The parade is free to attend for spectators and their pets. Stick around after the parade for the Weiner Dog Derby at Soulard Market Park.